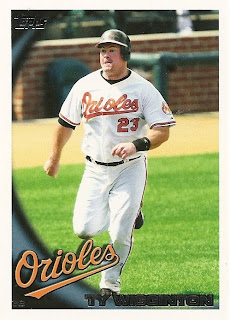 You can't stop Ty Wigginton. You can only hope to contain him. This fire hydrant-shaped man is currently the Orioles' leading hitter with four home runs and 10 RBI, all of which have come in the past week. Today he sparked the Birds' second win of the season with a two-run double and a two-run homer. I find him to be one of the most entertaining and fascinating guys on the team, and not just because he has a ridiculous name and he's roly-poly. (Though it's worth noting that in the April issue of the "Orioles Magazine" game program, he lists "beef jerky" as one of his three essentials should he ever be stranded on an island.)

Wiggy also delivered his own son, Cannon, in the bedroom closet of his North Carolina home in December of 2006 when his wife Angela went into labor unexpectedly. A 911 operator walked him through it, and there were no complications. Ty even tied off the umbilical cord with a shoelace. He's like MacGyver, except that he can play every position on the baseball field to boot.
Posted by Kevin at 11:10 PM

I watched the last inning of last night's game, and I was hoping for a Wigginton card today. You never disappoint.

That takes "delivering in the clutch" to a whole new level!

William - As opposed to the Orioles, who are leapfrogging over disappointment and straight to devastation.

Tim - Considering Ty's misadventure at third base last night, it's fortunate that he had surer hands in that closet...