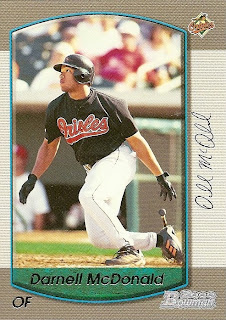 One of the best things about being a baseball fan is the unexpected emergence of a nondescript minor league callup as a short-term hero. While Darnell McDonald never emerged as a star commensurate with his first-round draft status, he's now providing a surprising boost to the shorthanded Red Sox. In his season debut last Tuesday, all he did was provide a game-tying two-run homer in the eighth inning and a walkoff single in the ninth. He homered again the next day, and is batting .353 in the early going. At age 31, he's making the most of what could be his last opportunity.

Similarly, Rhyne Hughes is the toast of Baltimore right now. An eighth-round draft pick of the Rays in 2004, he stalled out in the Tampa Bay system before the O's picked him up late last year for a song. (That song was "Even Gregg Zaun is better than Dioner Navarro".) He could have been a third wheel around these parts, with top prospect Brandon Snyder and fellow 2009 acquisition Michael Aubrey both playing his primary position of first base. Then the Birds went out and got Garrett Atkins for some unholy reason.

But Hughes made the most of his situation, hitting .316 with three homers in spring training and shifting to the outfield at AAA Norfolk to start the year. So it was that he was in the right place at the right time last weekend. While he was tearing up International League pitching to the tune of a .353 average with three homers and 11 RBI, Atkins was predictably scuffling, culminating in an awful night at the office on Friday (0-4 with a double play and SEVEN runners stranded) that left him with a .543 OPS. The Orioles wasted no time in contacting Rhyne that same evening to tell him that he was headed for the major leagues for the first time. He excitedly told his brother, who broke the news on Facebook.

Two games later, all the Mississippi native has done is turn in back-to-back multi-hit games, reaching base in half of his ten trips to the plate. Saturday night he singled on the first pitch he saw from John Lackey to drive in a run. Sunday afternoon he doubled and scored Baltimore's first run, and much later his bases-loaded single gave the O's a tenth-inning lead en route to their third win in 19 tries in 2010. Oh, and did I mention that he's Not Atkins?

Look, I know that Rhyne Hughes isn't going to get on base at a .500 clip or bat .400 for his career, or for the season, or even for a month. He might not even stick around all year. Word travels fast in the major leagues, and teams and pitchers will find the holes in his swing. He'll stumble, and he might not ever get back up. But even if he never gets another hit in an Orioles uniform, some part of me will remember his time in the sun.
Posted by Kevin at 11:50 PM