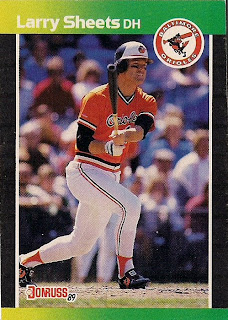 The Orioles are terrible. It's still early, but it's getting later all the time. We've been through all of this before, but never in 12 seasons of losing have they been the absolute worst team in the major leagues...and of course, never have they had such a realistically optimistic outlook before the season started. We could go through the ugly numbers, but you know them. 1 win, 11 losses. Nine straight losses. 34 runs scored in 12 games (2.8 per game). Four key players on the disabled list. A team batting line of .227/.300/.384, as of yesterday. A cast of relievers that enter games with blowtorches in hand.

It's been a long time since the O's were at the absolute bottom of the big leagues - 22 years, in fact. That was the enchanted 1988 season that began with a record 21 consecutive losses and ended with Cal Ripken, Sr. and Eddie Murray no longer in Oriole uniforms. The offense was the dregs of the American League, finishing seventh in home runs, eighth in walks, and last or next-to-last in all else. The pitching was nearly as bad, with four starters losing a dozen games and none winning more than eight. The Birds lost 107 games and won only 54, finishing 34.5 games behind the East-leading Red Sox.

Larry Sheets was emblematic of the total collapse of baseball in Baltimore. Looking like a breakout star thanks to his 31 homers, 94 RBI, and .316 average in 1987, he was a completely different player the next year. He may have made a tactical mistake by shaving his trademark mustache; the above photo is likely from Spring Training, and I haven't seen other photos where he appears bare-lipped, but it seems like Larry was a modern-day Samson. His power was in that mustache, and shaving it even one time sapped him of his strength. It's as good (and entertaining) an explanation as any for his precipitous one-year decline to a .230 average, 10 homers, and 47 RBI. He was outslugged in 1988 by Rick Schu, for crap's sake.

I don't know if there's a lesson here for the 2010 Orioles. That 1988 team was full of aging veterans and mediocre youngsters, and represented rock bottom after a half-decade's decline. This team has much more talent, and did have much more hope.

Maybe they should all grow bad mustaches.
Posted by Kevin at 11:08 PM

Ah, yes, the bad old days of Shits and Assy, as my grandmother less than endearingly referred to Larry Sheets and Don Aase.