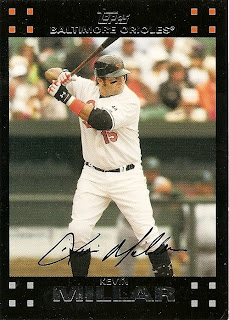 Last week, as major league teams finalized their 25-man rosters, one of the casualties was former Oriole Kevin Millar, who was beat out for a spot on the Cubs' bench by minor league journeyman (and ex-Baltimore farmhand) Andy Tracy. These things happen all the time in baseball, particularly when you're a doughy 38-year-old first baseman whose numbers have declined steadily for four years. But we don't often spend much time dwelling on the human element, on the fact that a guy like Millar is being confronted with his mortality and the end of a lifelong dream. Few players seem to enjoy themselves both on and off the field as much as Kevbo.

I guess it shouldn't have been surprising when he admitted that he broke down and cried while leaving the Cubs' spring training facility.

Millar said that he exited general manager Jim Hendry's office and spotted scout Gary Hughes, who signed him to his first professional contract with the independent St. Paul Saints in 1993. He shook Hughes' hand, embraced him, and cried like he hadn't in years. He acknowledged "the reality of, 'Wow, this could be it'".

It's unsurprising that Kev's already expressed a desire to remain in baseball in any capacity possible, be it front office or television or anything else. I've said since he parted ways with the O's at the end of 2008 that he would be a great guy to have around, if only you didn't have to worry about getting him on the field. I'd absolutely welcome him back with open arms as a coach. He's the sort of goober that could keep the team motivated and loose. Wherever he lands, I wish him all the best.
Posted by Kevin at 10:16 PM

With all the absolutely awful 'talent' ESPN rolls out as analysts I'm guessing they would welcome Millar as a huge improvement over whomever he replaced.

Bob - True. Plus, he's an ex-Red Sox player, so he meets their qualifications.

No arguments about '07 Topps. Bleah.