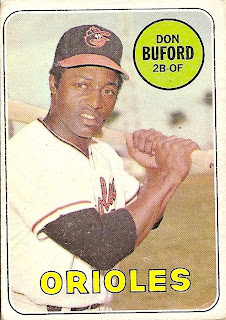 I mentioned recently that I had been neglecting Don Buford on this blog. The only post I wrote about him was this one, the third-ever Vintage Friday way back in January 2008! Perhaps it's somewhat fitting that Buford, one of the truly underrated players of his era, has gotten short shrift from me.

There are a few factors working against Don. He had a fairly short career in the major leagues, just nine full seasons. The White Sox signed him in 1959 after a collegiate career at the University of Southern California, and he was 27 by the time he cracked Chicago's starting lineup in 1964. But he was a league-average hitter in his four years manning second and third base on the South Side, posting a 103 OPS+ and stealing a total of 114 bases. (Of course he was also caught stealing 57 times, giving him a sub-optimal 67% success rate.)

But Buford truly thrived after being traded to Baltimore in the deal that reunited Luis Aparicio with the ChiSox. His lowest OPS+ from 1968 through 1971 was 126, which came in the 1970 championship season. That year, he led the club with 99 runs scored and 109 walks, and his .406 on-base percentage trailed only AL MVP Boog Powell (.412) for the team lead. He also set a career best with 66 RBI. Again, that was the least-successful of Don's first four seasons as an Oriole. And he still got some down-ballot MVP consideration, just as he had in 1968 and would again in 1971.

That 1971 season was Buford's masterpiece. He made his only All-Star team, topped the American League with 99 runs scored (the third straight year he'd had exactly 99), tied Frank Robinson with a team-high 153 OPS+, and also reached personal bests with 19 home runs, a .413 OBP, .477 slugging percentage, and an .890 OPS. All this for an Orioles squad that topped 100 wins and reached the World Series for the third consecutive year. Not bad for a 34-year-old guy. Of course, a big theme in sports is "what could have been", and for all of their dominance from 1969 through 1971, the O's won just that one World Series. If they had been dealt a bit more luck in '69 and/or '71, they might hold an ever higher place of esteem in baseball history and Buford might be talked about more today.

Getting back to the relative brevity of Don Buford's career, he had an unbelievably poor season in 1972. His slash line was only .206/.326/.267, meaning that his OPS tumbled nearly 300 points and his OPS+ (76) was exactly half of what it had been the preceding year. He had just 13 extra-base hits and 22 RBI in 485 plate appearances. The Orioles released him the following February and he played the final four seasons of his career in Japan for the Taiheiyo Club Hawks and the Nankai Hawks. The abrupt end of his O's tenure doesn't change the fact that "Buf" was an excellent table setter for the greatest teams in Oriole history.
Posted by Kevin at 5:01 PM

One of my favorite Orioles. I remember Don had critical hit against the Yankees during the pennant run in 1970--a night game in Baltimore, he hit a single off Lindy McDaniel to score Brooks Robinson and win the game. At least that's what I remember...

Doug, I'll bet you're refering to this game. One of the best regular season games I've ever seen. Buford won it in the bottom of the ninth with his single. Brooks had gotten on base but Grich ran for him so it was Grich and Dave Johnson scoring.
Frank Robinson had hit his second homer leading off that to get the O's within a run.
The O's then loaded the bases with nobody out. McDaniel threw eight straight strikes and Buford stood there with one strike left for the O's when he ripped that hit.
About 12 years later I was sitting with Earl Weaver at a writers luncheon at the Winter Meetings in Houston and brought up that game. He took off with the story and remembered every pitch of that ninth inning. Classic.
I remember listening to the game the night before when Brooks hit a grand slam to beat the Yanks in the tenth inning. Those were the days!!

When I was a kid, the story was the the O's traded Buford to Japan for the Datson that drove relievers in from the bullpen.