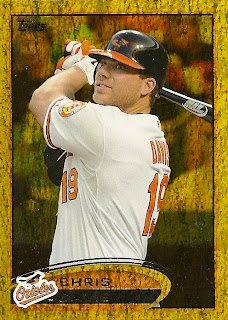 It was miserably cold and damp at Oriole Park at Camden Yards last night, but that didn't seem to bother Chris Davis. The Birds' slugging first baseman went 3-for-4 with a pair of runs scored and 4 RBI, and he put the exclamation point on a 10-1 rout of the Athletics with a seventh-inning home run. He launched the ball 418 feet down the right field line for his first career homer onto Eutaw Street. It was Chris' fourth home run of the season and his third of the home stand, as he looks to shake the "AAAA" label that he acquired with the Texas Rangers. So far, so good: in this young season, Davis is hitting .313 and slugging .582. He's even striking out a bit less, though 17 K's in 67 at-bats doesn't exactly make him Tony Gwynn. It would be nice if the O's had a legitimate first baseman for the first time since...what, Rafael Palmeiro? We'll see how the next 140 games go.
Posted by Kevin at 12:01 PM

who also came from texas

Max - MASN clocked him at 91 on his first few pitches! At any rate, he throws harder than Jamie Moyer by a good margin.