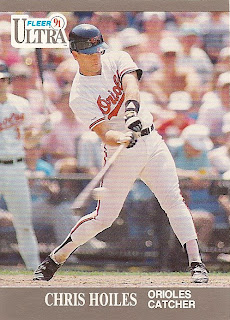 As if I needed another reason to like Chris Hoiles, I found out from his Twitter feed (@c23hoiles) that he was also watching Wrestlemania on pay-per-view last night. In case you were wondering, he was suitably impressed by the Hell in a Cell bout between the Undertaker and Triple H. I would have to agree that it was very entertaining, and that's coming from someone who generally dislikes Triple H.

Oh, and there's some slightly more universally accessible news about Chris Hoiles today. The Orioles announced that he will be receiving the ceremonial first pitch before Friday's Opening Day game. That pitch will be thrown by Rick Sutcliffe, the other half of the Birds' battery in the first game at Oriole Park at Camden Yards. It should be a fine way to kick off the 20th-anniversary season of the finest ballpark in the major leagues.
Posted by Kevin at 8:40 PM

Team Phungo will be at that opening day gm and looking forward to it.

Sutcliffe and Hoiles as nostalgic figures. Wow, this whole '20 year' thing has me feeling quite old. :-(

Phungo - I hope you enjoyed yourself! We had a good time, which is pretty much guaranteed as long as the O's win. :)

Bob - Tell me about it. I saw recently that Bryce Harper (Nats' top prospect) was born in 1992. Sheesh.