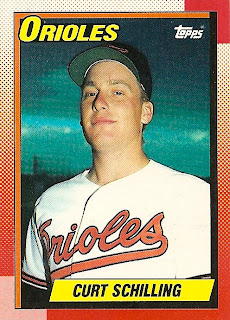 Normally when Curt Schilling talks, I tune out, but I have to admit that the anecdote about his major league debut with the Orioles made me laugh. Curt was tabbed as Baltimore's starting pitcher on Wednesday, September 7, 1988 for a home game against the Red Sox. In the pitcher's own words:

The night before the game I stayed at a hotel down the street from Memorial.  The Sox were staying there too – next thing I know, Boggs, Greenwell, and Stanley are buying me beers trying to get me drunk.  I suspected that they were doing that just so they could destroy me the next day."

Fortunately for Schilling, he either exhibited sufficient restraint or had a high tolerance for alcohol. He was a bit wild in his debut, walking five and striking out only two, but he gave up just three runs in seven innings. He left trailing 3-2, but escaped with a no-decision when the Orioles rallied for two runs in the bottom of the ninth against Bob Stanley. The Boston reliever blew the save by allowing a bases-loaded single to Billy Ripken and a run-scoring groundout by Cal Ripken, Jr. Maybe Stanley's the one who should have stayed in his hotel room on Tuesday night.
Posted by Kevin at 8:49 PM

And then we traded him and all was lost. But at least we found some pitching in 2012

H-Man - Yep. You generally hope it doesn't take decades, but the Rangers were more or less in the same boat until recently and they're doing fine now.