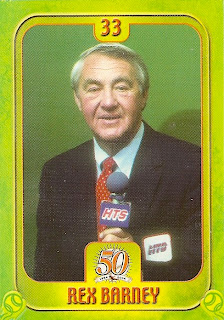 It looks like I have a new set to chase.

This is part of a 50-card set produced by the Maryland Lottery to commemorate the Orioles' 50th anniversary in 2004. The cards were sold in packs at lottery stations, and if you collected all 50 you were eligible for a prize drawing. I had one or two of these that wandered into my collection through various trades, but I found a whole stack in a dime box at the Northpoint Flea Market last Saturday. It's a really neat set, as it features not only most of the O's legends (Frank, Brooks, Boog, Jim, Cal, Earl...no Eddie, though) and favorites (Tippy, Dempsey, McGregor, Bumbry), but also gives a little attention to beloved announcers/broadcasters Rex Barney and Chuck Thompson. There are cards featuring both Memorial Stadium and Oriole Park at Camden Yards, as well as cards for each of the team's three World Series winning seasons.

But of course there's a catch. I've got 43 of the 50 cards in my possession now, and of those I'm missing, cards #46-50 are the rarest. The Lottery had to make it a challenge for participants to collect the whole set if there were prizes involved. I've read that #50, featuring Babe Ruth with the International League Orioles, is in the shortest supply, with one estimate placing its quantity at 10,000. So if you see any of those floating around, let me know. The other two cards I need are #32 (Camden Yards) and #35 (Mike Flanagan).
Posted by Kevin at 8:11 PM

"Give that fan a contract!!"

Flanagan is for sale here

Hey Kevin, if you come across another Rex Barney and/or Chuck Thompson let me know. I'd be real interested. Thanks

Kevin, Did you just buy it? One minute it was for sale, the next it was sold.

Randy - It wasn't me. Maybe next time.

Doesn't have the broadcasters listed in that ebay sale. Too bad you mised the Flanagan.

As an aside.... Since when has eBay quit ID'ing an auction winner?

how much is the wole set worth