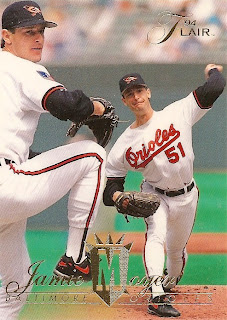 You had to know that this post was coming. Ever since Jamie Moyer signed with the Rockies in his quest to pitch a 25th big league season (and 28th professional season) after missing all of 2011, I've been monitoring his progress. I was thrilled when he earned a spot in Colorado's starting rotation to begin the year, but I figured I'd save the celebratory post for the occasion of his first win. Last night, the lefty made history. By holding the Padres to six hits and two unearned runs in seven innings, Moyer became the oldest pitcher to ever win a major league game. At 49 years and 150 days of age, he bested the mark set by the Dodgers' Jack Quinn in 1932 by a cool 80 days. In true Jamie Moyer fashion, he did it all without throwing a single one of his 87 pitches at 80 miles per hour or greater.

Jamie also had a remarkable sense of timing in accomplishing the feat when he did. As I noted, yesterday was the 47th anniversary of Jim Palmer's big league debut. Moyer's win was the 268th of his career, tying him with Palmer on the all-time list. Not only that, but it was also 66 years to the day that Jack Quinn passed away. I don't want to end on such a morbid note, so here's a few more of those endless and delightful Jamie Moyer age facts:

-He is older than every member of the Rockies' original 1993 starting rotation and their Opening Day starting lineup, with the exception of first baseman Andres Galarraga (born June 18, 1961).

-He debuted with the Cubs on June 16, 1986. In the news at the time: the USFL's antitrust lawsuit against the NFL, Mikhail Gorbachev's new arms-control proposal for the USSR, protests over apartheid in South Africa, and the NBA draft prospects of Brad Daugherty and Len Bias.

Some day I will tell my children that I saw Jamie Moyer pitch...as they watch him pitch.
Posted by Kevin at 10:56 PM

I like tracking the oldest players in MLB by the year they first appeared in a Topps set, since my folks have bought me one every year starting with 1985. If I'm not mistaken his first set was the 1987 wood background. I got that set before I was a teenager and am now in the back half of my 30's!

A few other interesting notes:

His first game was a day game at Wrigley, of course, because it was so long ago that they did not have lights at the stadium yet.

He is older than two current Hall of Famers - Barry Larkin and Roberto Alomar!

Only 5 pitchers have more wins after age 30 - Randy Johnson, Gaylord Perry, Warren Spahn, Phil Neikro, and Cy Young - all current (or future) Hall of Famers. By seasons end Moyer could pass both Johnson and Perry on this list.

Wins after age 40 - only Niekro has more than Jamie!

Moyer has faced 8.9% of all hitters in major league history.

This may be the most awesome stat of all.