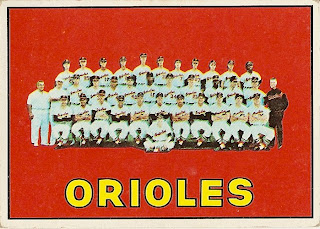 I haven't done many late-night updates recently, but I just got home after a long day that included my second-ever Opening Day experience at Oriole Park at Camden Yards. This time I went with my sister; it was my treat for her birthday. The weather was beautiful, though it was a bit chilly where we sat in the shade of the upper deck overhang. Our seats were on the second level, midway down the third base line. After briefly braving the crush of orange-and-black-clad revelers across the street at Pickles Pub and Sliders, we checked out the new rooftop bar inside the ballpark. It offered a great view of the field, and there was plenty of comfortable seating. We made sure to be in our seats by 2:30, when the on-field ceremonies began. Rick Sutcliffe threw a picture-perfect strike to Chris Hoiles for the first pitch, Nick Markakis and Matt Wieters were presented with their 2011 Gold Glove awards, and of course all of the players, coaches, and other team personnel were introduced. It was bittersweet to see the video board tribute to all of the past members of the O's organization who had passed away since last April, with Mike Flanagan being the final person recognized.

The game certainly lifted everyone's spirits, though. A sellout crowd of 46,773 was treated to a 4-2 win over the Twins. Jake Arrieta, finally healthy after having a fibrous mass removed from his elbow last summer, breezed through seven shutout innings. He allowed two walks and two singles, and got sufficient support from Nick Markakis, who hit a two-run homer and a run-scoring triple. Relievers Troy Patton and Jim Johnson made things a bit tense in the ninth inning, but Johnson nailed down the save by inducing a fielder's choice grounder from Trevor Plouffe to strand the tying runs.

I'm certainly trying to keep my expectations reasonable for the Orioles in 2012, but 1-0 is a fine way to start the season.
Posted by Kevin at 11:51 PM