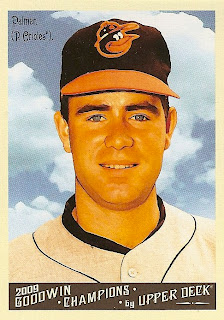 Do you know what today is? Yeah, it's tax day. But I know that everybody already filed months ago, to save the stress of doing it at the last minute.

Okay, maybe not. But putting aside those fun study dates with the 1040s and W-2s and hey hey, it's also the 47th anniversary of Jim Palmer's big league debut. The tall, slim righthander was born in New York but raised in Arizona, and the Orioles convinced him to forgo college and sign with them in 1963. He reported to the Aberdeen (South Dakota) Pheasants in 1964 for his first pro season and went 11-3 with a 2.51 ERA despite walking 130 batters in 129 innings. Manager Hank Bauer saw enough promise to bring him to the major leagues to begin the 1965 season, and the 19-year-old served an apprenticeship in the bullpen.

That brings us to April 17, the third game of the young season and the Saturday afternoon opener of a two-game series at Fenway Park. The Birds busted out of the gate with five first-inning runs, with homers by Paul Blair and Brooks Robinson helping to chase Red Sox starter Bill Monbouquette before he could get an elusive third out. Curt Blefary also went deep in the third for some insurance. But veteran O's starter Robin Roberts wasn't long for the game, either. He was reached for a pair of first-inning runs and allowed the first three batters to reach in the third inning. With the score now 6-3 and the tying run at the plate in the form of Carl Yastrzemski, young Jim Palmer was called upon for a baptism by fire.

Wearing the jersey number 22 that would be retired in his honor two decades later, Palmer began his career by walking Yaz to load the bases. He might have sighed in relief after striking out Tony Conigliaro looking for the first out, but outfielder Lee Thomas (now a special assistant to Orioles GM-type Dan Duquette) properly welcomed Jim to the show with a two-run single. The rookie stopped the bleeding after that, inducing a 5-4-3 double play grounder off the bat of Felix Mantilla. It was a 6-5 game.

Palmer had a few hiccups in his second inning of work, walking opposing pitcher Arnold Earley and gifting him second base on a wild pitch, but otherwise he was unharmed. Two ground balls and a short fly ball, all handled by shortstop Luis Aparicio, and "Cakes" had his first major league appearance in the books. His final totals: two innings, one hit, two walks, one strikeout, no earned runs, two of three inherited runners scored. Nothing to put in the headlines, but no disaster either.

Jim was followed to the mound by Dave McNally, another youngster who would soon step into the starting rotation and stay there for some time. McNally breezed through the fifth inning before walking two of the three batters he faced in the sixth. Dick Hall and Harvey Haddix allowed both runners to score, putting Boston ahead for the first time that afternoon. By the end of the sixth, the hosts had taken an 8-6 advantage. The game was far from over, though.

The O's scored once each in the seventh and eighth innings, with Charlie Lau's solo homer tying the game at 8-8. But in the bottom of the eighth, wildness was once again the undoing of the Orioles. Stu Miller walked each of the first two batters and was replaced by Steve Barber. Barber went walk-single-walk, and it was 10-8 with the bases loaded and nobody out. Ken Rowe retired three of the next four Red Sox to get out of it, but it was suddenly a 12-8 game. Blefary's second solo home run of the game was too little, too late, and the Birds lost 12-9.

Better times were ahead, of course. The Orioles won 5 of 6 at the end of April to get their heads above water, and though they never sat atop the American League, they finished with 94 wins, just a few games off the pace of their breakout 1964 season. The acquisition of Frank Robinson prior to the 1966 campaign was the catalyst that propelled the Birds to their first World Series title, and you know all the rest. Jim Palmer went 5-4 with a 3.72 ERA in 27 games (6 starts) in 1965, and walked 5.5 batters per nine innings. He would not have a BB/9 greater than 4.0 in any other full season in his career, and though he was hampered by various injuries, he persevered to win 268 games with a 2.86 ERA and 126 ERA+ in 19 years in the majors. He is the only pitcher to win a World Series game in three different decades, and he famously never allowed a grand slam. He was a first-ballot Hall of Famer in 1990, and you can still hear him on Orioles telecasts on MASN. Congratulations on a long and impressive career, Jim.
Posted by Kevin at 9:32 PM

Great post, Kevin. Thanks for the trip down memory lane.

Another well timed post, Kevin. Jamie Moyer tied Palmer's career win total with his 268th last night. Of course Jamie has done that over a 25 year career that started much slower (and lasted much longer) than Jim's.

Tim - I'm sure you can guess who I'll be featuring tonight...