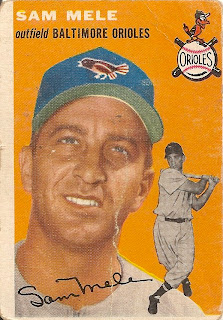 It was a dry, warm Tuesday afternoon in Detroit, Opening Day of the 1954 baseball season at Briggs Stadium, which most fans came to know as Tiger Stadium. The home team was hosting the Baltimore Orioles, who had spent the previous 52 seasons existing as the St. Louis Browns, second-class citizens in their own city and the bottom-feeders of the American League. Now they had traded in brown caps for black ones and moved to the East Coast, but the talent-deficient roster was essentially the same. Most O's fans today wouldn't recognize many of the names.

-Second baseman Bobby Young was the first batter in team history, wearing the uniform number 5 that would soon be claimed by a young third baseman who stayed around for more than 20 years. Young grounded out to first base to break the ice on Baltimore's return to the majors after a half-century absence.

-Center fielder Gil Coan, batting third, singled off of Tigers starter Steve Gromek for the Birds' first hit. The 32-year-old would be out of the league within a couple of years.

-Don Larsen (there's a familiar name) threw the first pitch for the club, and struck out the first batter he faced, Detroit second baseman Frank Bolling. He wasn't as fortunate in subsequent innings, permitting leadoff home runs to Ray Boone, Walt Dropo (who finished his career as an Oriole in 1961), and Bolling in innings 4, 6, and 7. Those three homers accounted for all the scoring in a 3-0 loss; both starters went the distance but Gromek kept Baltimore inside the park and off the scoreboard. The defeat was the first of a league-high 21 for Larsen and the first of 100 for the seventh-place Orioles. The equally woeful Athletics, playing out their final season in Philadelphia, lost 103 to keep the O's out of last place.

-Incidentally, Larsen also had the team's first extra-base hit, a double in the fifth inning.

Other notable firsts would have to wait for the next day's game. Left fielder Sam Mele drove in Bobby Young in the first inning of that contest with the Orioles' first run. The O's pushed across three runs in that frame and starter Duane Pillette made them hold up, earning the first win in team history by a 3-2 margin.

The Orioles had their home opener on Thursday April 15, topping the White Sox 3-1 in another squeaker, with Bob Turley turning in the third straight complete-game effort by a starter. Bespectacled catcher Clint "Scrap Iron" Courtney hit a home run in the fourth inning, the first ball to clear the fences at Memorial Stadium and one of just 38 career homers for him. Power was not a strong suit for those Orioles, who were dead last in the league with 52 total home runs in 1954. The Senators were next-to-last with 81, and the Pirates brought up the rear with 76 in the National League. Vern Stephens led the Birds with 8 home runs.

It wasn't always pretty, but the men, women, and children of Charm City finally had a big league team of their own.
Posted by Kevin at 7:18 PM