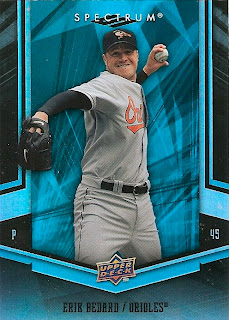 It's not easy being Erik Bedard. After spending the past four years as a starting pitcher for the If He Were Healthy All-Stars, the lefty signed with the Pirates for $4.5 million this season. So far in 2012, he's been perfectly healthy, and has shown that he's still got some value in that arm. Through four starts, he has a 2.63 ERA and a 135 ERA+. Sure, his strikeouts are down in the early going - 6.4 K/9 IP compared to a career figure of 8.7 K/9 IP, but he's also allowed only one home run in 24 innings.

He's also got an 0-4 record, because the Pirates are an offensive trainwreck. He lost the team's opener by a 1-0 score, with Roy Halladay holding the Bucs to a pair of hits in 8 innings of work. In each of his other three starts, Bedard has permitted two earned runs and received exactly one run of support. It looks like Erik will have to take matters into his own hands. So far he's got a single and four whiffs in eight at-bats this year, but when you account for his interleague appearances, he's a career .214 hitter (6-for-28). Through their first 15 games, the Pirates are hitting .202 as a team. Woof. It's enough to make you wonder if the ex-Oriole had any comparable contract offers last winter, and whether he's having second thoughts about going to Pittsburgh.
Posted by Kevin at 7:54 PM