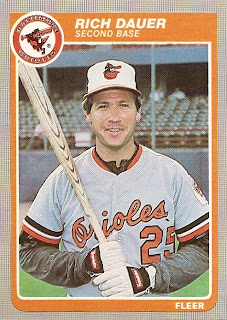 It's nice to see Rich Dauer smiling. On most of my other cards of the longtime O's second baseman, he either looks forlorn or he's grimacing with exertion. But here we see Rich taking time out from a Spring Training or early season warmup to flash the photographer his warmest smile. In another year, he'll play in his last major league game. But for now, life is good. He's still playing every day, sandwiched between Eddie Murray and Cal Ripken, Jr. in the Oriole infield. As you can see from the patch on his left sleeve, he's suiting up for the defending World Champions. The windbreaker under his jersey indicates that Rich Dauer is a fashion plate.

You can't keep #25 down. Rich has logged several years as a minor league manager and major league coach with the Indians, Brewers, and Royals. He's currently the minor-league infield coordinator for the Colorado Rockies. If you ask him very nicely, maybe he'll put on the windbreaker for old time's sake.

I never read this stuff until I came across this randomly. Why do you act like if you ask him nicely.. like he is not a happy individual. He is. I'm his daughter.

Not only is Rich Dauer happy at times he is downright silly.
Former CA racquetball partner.
Good Luck with the Rockies 2010 season.

found this blog-been around baseball many years he is steady reliable knows his stuff.If they keep the faith they could be right there.

Saw you get hit in the face today. Remember you playing for the Orioles. Hope all is well and you recover quickly and completely.