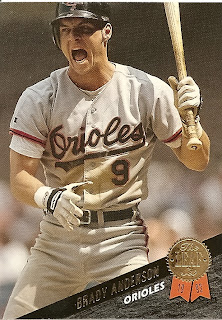 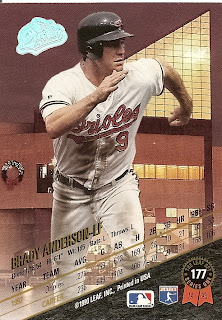 Here we see Brady Anderson, during his breakout season in the major leagues (21 home runs and 53 steals) dealing with anger, with disappointment, with failure. I'm guessing he has just struck out; from the looks of it the third strike was called and he does not agree with the home plate umpire. Of course, his complaints aren't going to get him very far. In the end, he's still out.

Yesterday, Brady struck out again, five years after calling it a career. In his first year of eligibility for the Baseball Hall of Fame, he did not receive a single vote. This, of course, means that he will be dropped from the ballot in future votes.

Brady Anderson is not a Hall of Famer. He was an good player over his fifteen-year career, as his 109 OPS+ suggests (100 is league average). In his prime you could count on him for 15-20 home runs and 20-30 steals and steady outfield defense. He had one monster season in 1996 (hitting in front of Roberto Alomar, it might be noted): 37 doubles, 50 home runs, 110 RBI, 1.033 OPS, 156 OPS+ (if 100 is league average, 150 might be considered Hall of Fame; Frank Robinson topped that mark in thirteen different seasons). Although steroid accusations have hounded him for a decade, they remain only accusations. You'll forgive me for trying to presume that a major league player in the 1990's is innocent; after all, sometimes a fluke is just a fluke. Remember Davey Johnson's 43 home runs in 1973?

Brady Anderson will never have a plaque in Cooperstown. But in a world where some esteemed writer sees fit to dole out one of his ten votes to Todd Stottlemyre's 138 wins and 4.28 ERA, I'd say Brady at least deserves a courtesy vote. After all, that seems to be the way the game is played.

A couple more points before I go: I love that the back of this card features Brady running in mid-stride and superimposed over the Baltimore Inner Harbor for no good reason. I love it even more because the wreath hung on the exterior of the National Aquarium indicates that the picture was taken at Christmastime, which couldn't be any farther removed from baseball season. I also love the cheesy rainbow foil Orioles logo in the top left corner; Leaf put it there just because they could. Nearly a decade removed from the 1990s baseball card zeitgeist, I sometimes look back on these designs with the same embarrassment that my parents feel when they reminisce about their bell bottoms and Beatle boots.

I loved that card when it first came out. It just looked unique.

Additional negative style-points for the slanted presentation of the stats on the back.

The design of '93 Leaf was such an obvious rip-off of '92 Ultra -- especially with the faux-marble borders. The "cityscape" backs were awesome though.