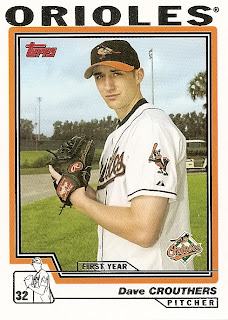 There are all sorts of different ways that I might react when I pull an Oriole out of a pack of baseball cards. Mostly, I get excited, because I feel like I never get a lot of cards of my hometown team. At the very least, if I pull someone notorious to O's fans, like David Segui or Sidney Ponson, I might laugh ironically. When I pulled this card in the summer of 2004, however, one thought crossed my mind:

"Who the hell is Dave Crouthers?"

Frankly, I'm still wondering. This is the problem with the hobby's love affair with rookie cards. Everyone is always trying to get a jump on the Next Big Thing, and eventually they just started tossing random low-level minor leaguers into base sets. I think it sucks that the fringe major leaguers - the underappreciated middle relievers and fifth outfielders of the world - get bumped out anymore. Now MLB has attempted to put a stop to that by declaring that a player cannot have a Rookie Card before they actually play in the bigs. But this is an inelegant solution: now rookie cards are defaced with a big garish ROOKIE CARD diamond and bat logo thing, and the card companies are still taking advantages of loopholes like prospect insert sets and draft pick sets and all sorts of other nonsense.

Baseball Reference stops after the 2004 season, which he spent at AA Bowie, performing in a mediocre fashion (9-9, 5.01 ERA). In the offseason, he was traded to the Cubs with Jerry Hairston and Mike Fontenot for some guy named Sosa. Did Dave really call it quits? Did he get hurt?

I think we should put poor Dave Crouthers on a milk carton.
Posted by Kevin at 7:51 PM

Here is a story about him in case you didn't know:

I have sometimes thought about starting a mini-collection of cards showing only people who never actually played in the big leagues.
I'm not sure whether the recent card-company madness should encourage me (since there are so many more of these than there used to be) or discourage me ('cause I'll never find 'em all.)

Laurens - thanks! That would certainly explain it. I hope things work out for him in some way.

Kinky - It's always interesting to track trends in your card collection; one thing that always interests me is getting one player's card on all the various teams he's played for.

Kinky - Bowman cards alone will keep you busy on that collection for years :)