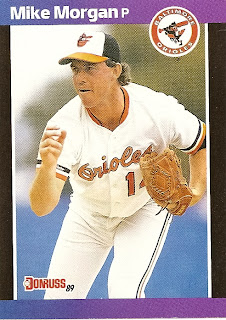 Mike Morgan is the journeyman's journeyman. He set the major league record by suiting up for a cool dozen different teams in his 22-year career. His longest tenure was not quite three-and-a-half years, with the Cubs. Mike's resume looks like this:

That's right; his last team didn't come into existence until 20 years after his career began. Mike was traded six times in his career in deals involving a total of eleven other players, including Fred McGriff, who would go on to hit 493 home runs in his career. He was also once traded along with Todd Zeile, another former Oriole who played on eleven teams himself.

These trivia bits are entertaining enough, but I had another reason for choosing Mike Morgan as today's card. You see, one of the most rewarding aspects of blogging and reading other card blogs has been trading. I've made trades with the guys behind White Sox Cards, Thorzul Will Rule, and Cardboard Junkie, and also received neat giveaways from the masterminds of Indians Baseball Cards. Always. and The Fleer Sticker Project. So as my first full year of card collecting since the mid-90's begins, I'm looking to make more trades.

You may have noticed the sidebar link to my other blog, The Great 1965 Topps Project. The short story is that I'm trying to complete as much of the 1965 Topps baseball set as I can through trades. I've posted lists of all of my duplicate cards that are available to trade. I've made a little bit of progress, but at the same time I want to use that site as a hub for trades of a larger variety. So if you don't have any 1965 Topps for trade, you can check out the top of the left sidebar to see what else I need and make me an offer! Right now I've got a few needs lists up, since I'm determined to finally complete my Topps base sets from 1986-1989 and 1993. I'll update it as time permits with other sets I need to complete. I also plan to put up lists for Orioles team sets, to make sure that this blog doesn't ever run out of subjects. (Don't panic, though: at present, I've got enough O's cards to last me a couple of years at least!)

Maybe Mike can come out of retirement and pitch for the White Sox in the bullpen. He couldn't do much worse than last year's middle relief.