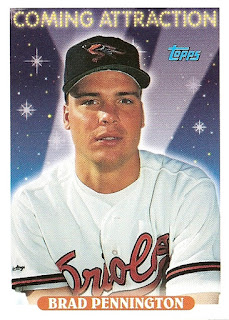 Ah, Bad Brad. He arrived in Baltimore the same time that I became a fan, the summer of 1993. He may have been my first exposure to the phenomenon of a highly-touted rookie failing to meet expectations. I can't even remember much about him, except that he was big (6'5") and he threw hard. As it turns out, you need to do a little more than that to stick in the big leagues. Pennington's first taste of the majors was also his longest and his best. Considering that he allowed 59 base runners in 34 innings with a 6.55 ERA, that doesn't say very much for him. Overall, he appeared in 79 games over parts of five seasons for the Orioles, Reds, Red Sox, Angels, and Devil Rays. In 75 and two-thirds innings, he allowed 67 hits and 89 walks while striking out 83. His career ERA was 7.02. Sure, he could throw hard, but he clearly had no idea where the hell the ball was going.

The card itself is pretty ridiculous. Topps had been tabbing players as "Future Stars" since the early 1980's: big names such as Cal Ripken, Jr. and Bo Jackson had received this honor, as had several lesser players (Steve Searcy ring a bell?). All of a sudden, there were "Coming Attractions" in the 1993 set, with this silly searchlight-and-star-filled-sky backdrop. Coming Attractions proved to have an even shorter shelf life than Brad Pennington, while Future Stars made a hasty return and have been included in Topps base sets almost every year since.