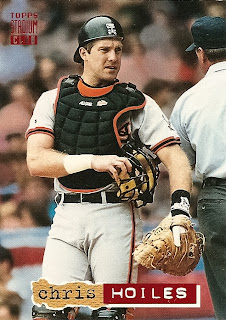 Ah, "Tractor Mechanic". That's got to be one of the best nicknames ever given to a player by his teammates. You just have to take one look at Chris Hoiles, and it all makes sense. It doesn't require a convoluted two-part explanation, like "Pronk".

The world may never know what Chris Hoiles was saying to the home plate umpire at this particular moment, in the middle of a road game in 1993. Perhaps he was complaining about the lousy coffee at the hotel. Maybe he was asking him if he thought weather-stripping was a wise investment. Possibly he's asking him if he saw the series finale of "Cheers" the previous week. It could be that he's telling the ump the sad story of how his breakout 1992 season was interrupted when that dirty no-good cheater Tim Leary hit him in the wrist.

"Sure", says the ump. "I never get tired of hearing that one." He rolls his eyes and puts his mask back on.

I drive through York, Pennsylvania a couple times a year on my way to and from my family's summer cottage, and once or twice more to visit a friend who lives in Lancaster. Some day, I'll make a pit stop for a York Revolution game. Maybe I'll get the skipper's autograph on this card, and ask him what he was saying to the umpire.

He'll crinkle his brow, much like he did in this photo. He'll look at me like I'm some kind of weirdo.

It's just as well. Whatever the truth might be, it's probably not as interesting as what I'd imagine.

I went to a ton of Orioles games in the early-'90s when I was growing up, and looking back, it seems like Jeff Tackett played in every game I went to instead of Hoiles. Call it bad luck or God just screwing with me, but we'd always go to games when he was resting.

Sorry to hear that, William. If you want to talk about God screwing with you, my Dad scored tickets to a Sunday afternoon game against the Angels in 1995...game number 2,129 for Cal. I witnessed pre-history, and one lousy start by Jamie Moyer. Also, our seats were right next to the bullpens and an errant Doug Jones throw clattered into the screen and took a few years off of my life.

Ya gotta watch out for Doug and his flaming balls, ya know....

This card gets negative points for the clashing font-styles in which "Chris Hoiles" is rendered.

Now who thought that was a good idea?

I'll admit to liking the label-maker/typewriter hybrid; be gentle on me. You're just lucky that this is an AL East card - the color strips for the players' first names were coded by division. I believe the NL West was purple; other colors included a light blue and a seafoam green. Eesh.