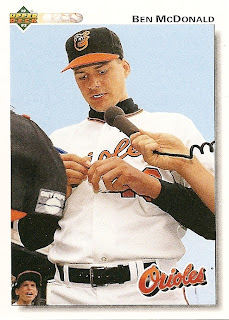 Here we see Ben McDonald wearing the vintage threads of the 1966 Orioles, the city's first modern baseball champion. The 1991 team would have been commemorating the 25th anniversary of the club's rousing four-game World Series sweep of the Koufax and Drysdale Dodgers.

It's good to see Ben multitasking, signing autographs while consenting to an interview with an unseen reporter. It even seems like he's skillfully ignoring the overly needy shouts of the kid behind him in the too-large cap. The best thing about this photo is seeing both the pitcher (and the Orioles as a whole) getting the concept of a throwback uniform right. More recently, it seems like every player that takes the field wearing a design from bygone days is draped in yards of baggy fabric, which may be acceptable as a tribute to the early 1900's, but couldn't be more wrong when flashing back to the polyester knit era. Unfortunately, we can't see Ben's lower body, but based on other cards in the set, I have reason to believe he may have even gotten the leg wear correct.

This year marks another 25th anniversary. It has been a full quarter-century since the Orioles last won the World Series, an event that I was much too young to experience. The team has already announced plans for Turn Back the Clock nights, fan giveaways, and appearances by former players. The 1983 Orioles were a great team full of talented players, and there's nothing wrong with celebrating your past.

I just wish we had something to celebrate in the present, or at least the near future.

I love the guy in the lower left corner who looks like he's in awe of Ben McDonald.

It must have been free hat and novelty microphone day at Camden Yards.