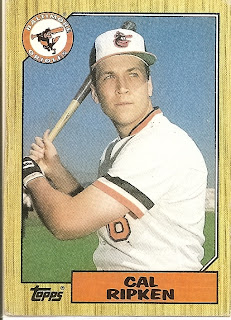 With my eighth post, on the eighth day of the year, I had to go with #8. I believe this is the first Cal Ripken card that I owned, and until recently it was the oldest. The young star shortstop has his trademark stoic, steely gaze, fixed on some point off-camera in Spring Training 1986. He has no way of knowing that he is about to suffer through his first losing season in the major leagues. He is still just two and a half years removed from catching the final out of the World Series, a soft liner arcing off of the bat of Garry Maddox. It was the perfect capper to a great season, an MVP campaign for a second-year player. He jumped up and down in jubilation, rushing the mound to join unlikely series MVP Rick Dempsey and winning pitcher Scott McGregor. He would have to remember this moment, for sure, but he'd be back someday. Wouldn't he?

Cal Ripken, Jr. suited up for the Orioles for eighteen more seasons and 2656 games after 1983. The team wouldn't even experience another pennant race until 1989. By that time, his father had already realized his dream of managing the O's (with his two sons forming the double-play combo), only to have it all taken away just six games into his second season at the helm. Every teammate from that World Champion team would be gone by Opening Day of 1989, as well. (Though Eddie Murray would return near the end of his career in 1996.) There wouldn't be another postseason until 1996; Cal and company would fall two wins short of making it to the World Series. The next year was even better, and ultimately even more disappointing. A first-place finish for the first time since 1983, but another 4-2 ALCS loss.

The following year, the foundation started to crumble. With key players seeming to age overnight, and new manager Ray Miller possibly in over his head, the 1998 Orioles sat in fourth place on Sunday evening, September 20. That's when Cal Ripken, Jr. removed himself from the starting lineup for the first time since May 29, 1982. Over the next two seasons, the team would slip further down the path to the laughingstock they are today and Cal would struggle to play in half of the games on the schedule. To add further difficulty, he would lose his father to lung cancer in 1999. Cal's body was ready to call it a career, and so was he, after a farewell tour in 2001 that coincided with a 98-loss season.

If you or I traveled back to Miami in Spring of 1986 and told Cal Ripken, Jr. how the rest of his career would unfold, that the losing seasons would outnumber the winning ones nearly two-to-one, that he would spend his post-prime years hounded at every turn by media members and autograph seekers who looked to him to "save baseball", that he would outlast every teammate that he had ever known to that point in time, that he would see his father cast aside by the team he loved and would ultimately lose him too soon, do you think he would consider doing anything differently? That is, would he start counting the days to free agency, or think about taking a day off once in a while?

He probably would think about it. For all of the adoration from fans and peers alike, Cal Ripken, Jr. is not a saint. But he is stubborn as well.

I think he would still choose to stay the path.

It is for the events and scenarios like what you put forth here that I hope we never, ever figure out time travel... Even if he knew all the things that were going to happen and he stayed the course anyway, something would be different because he would KNOW, and that alone would have been enough to change the course of history....

I always thought Cal looked freakishly pale on this card, like he hadn't ventured outdoors all winter.

Thorzul, you have a point there. It could be those harsh Aberdeen winters.