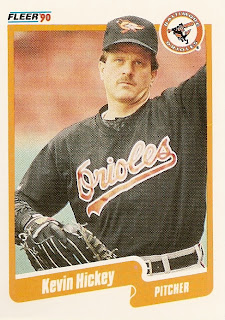 Well, it only took me three weeks to post my first Kevin. There aren't that many to choose from; off the top of my head, there's Hickey, McGehee, Brown, and Millar. Of the four, Hickey's resume reads the most like a movie script.

Kevin Hickey was a twenty-one year old softball pitcher when he was encouraged by friends to attend an open tryout at Comiskey Park in his hometown of Chicago. The White Sox liked what they saw, and signed him to a contract in August 1977. Four years later, he was called up to the big leagues and pitched in 124 games over the next three seasons, notching 14 saves. He bounced around the minor leagues for six years before making the Orioles' Opening Day roster in 1989 and having the best year of his career (2.92 ERA, 1.24 WHIP) at age 33 for a team full of castoffs and unproven rookies that spent most of the season in first place, just one year after losing 107 games and spending the entire season in dead last.

By 1993, Kevin was out of baseball...or was he? With a brand-new stadium at Camden Yards, Baltimore was chosen as the site to film a sequel to the 1989 baseball comedy Major League. Sure, the stadium was given a cosmetic makeover to look more like Cleveland's Municipal Stadium, but there was at least one former Oriole involved in the proceedings. Kevin played Indians pitcher Schoup (no first name given), allowing him to suit up in a major league stadium one more time.

Not bad for a softball pitcher from the Windy City.

Kevin was a centerfielder in his softball days in Chicago.