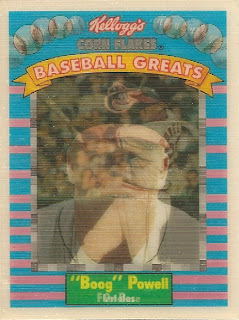 Here's a card that's fit for Thorzul's Mmmmmmmm...cards series. It was one of the many treasures that I rescued from my grandmother's ubiquitous boxes of Corn Flakes during my childhood. If the card looks a little funky, that's because it was made by Sportflics, the progenitors of the Moving Card. With a flick of the wrist, it switches from a head shot of the Booger to an action shot of #26 at the bat. It's campy and wonderful.

During the Orioles' first home stand of 2007, my aunt had box seats to an Orioles-Royals game, so close to home plate that you could smell the pine tar. She got sick and had to miss the game, so my father and I agreed to accompany my teenage cousin. I took a train from D.C. to Baltimore right after work and met the two of them at the ballpark. Since the train didn't pull in until 7:00, they had already made their way into the stadium and my Dad met me at the gate to hand over my ticket. As we made our way down to our seats, my Dad told me that he had just run into Boog Powell en route to the gate. This isn't a rare occurrence at Oriole Park, since Boog makes frequent appearances at his eponymous (and renowned) barbecue pit. But Dad had lucked out and happened upon him in a spare moment, without a crowd around. My father was positively beaming as he told me about the encounter. He simply approached Boog and politely asked if he could shake his hand, and Powell obliged.

It's funny; I've just never thought much about my father having idols. But in that moment I felt his enthusiasm and satisfaction. He's spent his entire life in Baltimore, and was fortunate enough to grow up rooting for the greats. Boog. Frank. Brooks. Palmer. Earl. He probably experienced his fair share of Powell's 303 home runs in an O's uniform, listening to Chuck Thompson on WBAL or even catching the odd Game of the Week or World Series contest on TV. If he was really lucky, he might have even seen a few of those moon shots in person over on 33rd Street. To a kid like my Dad, short and sometimes lost in the shuffle of his four older brothers (and one younger-yikes!), and more gifted artistically than athletically, Boog must have been larger than life. Even now, the 6'4" ex-first baseman must tower over my 5'8" father. All I know about him as a person is that he made my Dad's day with a simple word and a handshake. Thirty years after retirement, he's still portraying the hero.
Posted by Kevin at 8:03 PM

Kevin - thats a great story about your dad meeting Boog! That is one of the great things about baseball is how it transcends generations, and serves as reminder that even our dads were younger once and had their heroes as well.

Boooooog. i can recall the tears falling down my cheeks when the first AL playoff game headed to the 9th with the Birds down a run. I uttered in my best big boy voice that Boog was still coming up. Boog took Jim Perry deep in the 9th and the O's were on their way.