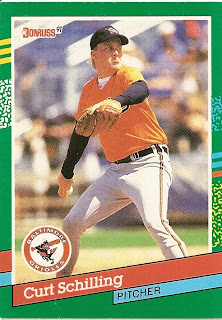 So we go from a really minimal, visually appealing card to a cluttered, completely fugly card. The good news is that I have enough of a variety in my collection that we won't be seeing any more 1991 Donruss for a long time. About the only good thing I can say about this card is that in the grand Donruss tradition, it lists the player's full name on the back. Curt's middle name, FYI, is Montague. Heh.

Many casual baseball fans probably aren't even aware that Curt Schilling pitched for the Orioles. They acquired him in a 1988 deadline deal; they sent veteran starting pitcher Mike Boddicker to the Red Sox for Schilling and a rookie outfielder named Brady Anderson. It was actually a pretty sharp trade by O's general manager Roland Hemond. Of course, this trade might look even better if Schilling had grown up a little sooner.

The brash young righthander was notoriously immature, and it may have been reflected in his early career trajectory. He didn't stick in the major leagues for a full season until 1992, four years after his first callup. Schilling's final numbers in Baltimore (1988-1990): 1-6, 4.54 ERA, 1.47 WHIP. Hindsight is 20/20, but you can bet that if the Orioles knew that the light bulb would come on for Curt, they would have thought twice about sending him to Houston in the Glenn Davis trade. In the end, it's just one more reason for Birds fans to be annoyed by Mr. Bloody Sock.
Posted by Kevin at 3:24 PM