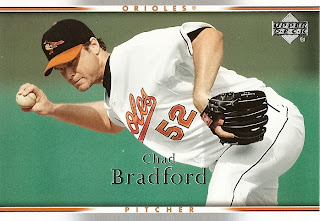 So we go from something old to something new, with the relief pitcher that many baseball reporters lovingly refer to as "Brad Chadford". With that kind of cheesy humor, I think I might have missed my calling as a sports writer.

I love the look of these 2007 Upper Deck cards. The full-bleed photos with minimal elements of design are downright classy. This picture in particular is a beauty. I've always had a certain affinity for submarine-style throwers; when I first became a fan in 1993, Todd Frohwirth was coming out of the Orioles' bullpen. Bradford is the first submariner to pitch for Baltimore since Frohwirth, and here we see him in action. The card is oriented sideways to fully capture his unorthodox motion. According to Moneyball, Chad threw from a sidearm position in high school, but the farther he advanced in baseball, the lower his arm angle dropped. He didn't even realize consciously that it was happening, but it allowed him to adapt to a higher level of competition.

There's so much about Chad Bradford's story to love, like the fact that his high school coach (who was also his Baptist minister) encouraged him to cuss while he practiced his pitching, to give him more of a competitive demeanor. Or the fact that his father suffered a paralyzing stroke just before Chad's second birthday, and defied the doctors' prognosis by ultimately surviving and regaining the ability to walk. But the best thing that I read about him was this poem that he wrote for a class assignment when he was eight:

Chad may not have gotten to play "shotestop", nor has he made it to the Cardinals or Dodgers. But he is an Oriole, and for that I salute him.