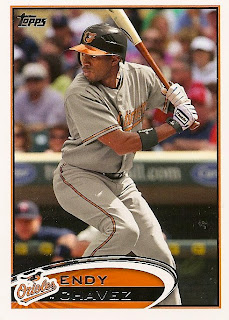 I wanted to tip my cap to pitcher Jason Hammel, who earned the win in a 5-3 squeaker today by pushing through bases-loaded situations in the first and third inning and hanging on to complete six innings of two-run ball. He also tied his career high by striking out 10 White Sox batters. Hammel won't soon make Orioles fans forget Jeremy Guthrie, the man he was traded for, but he's making a good first impression. Unfortunately, I don't have any Hammel cards yet, so he has to share space with another of today's key players, outfielder Endy Chavez.

Chavez, seen here hastily Photoshopped from a Rangers uniform to O's threads, was a surprise starter in left field thanks to Nolan Reimold's neck discomfort. Despite entering the game with just a pair of hits in 18 at-bats, the one-time Expo reached base three times from the leadoff spot in the order (single, walk, hit-by-pitch) and scored twice. He also made a running over-the-shoulder catch in the sixth inning to save at least a run. It was one of those under-the-radar performances that can get lost in the drone of a 162-game season, but for today it helped keep the Orioles in first place in the American League East. Yep, you read that right. There's 149 games left to go, but I didn't even expect the Birds to be atop the division at this point, a couple weeks into the season. Savor it.
Posted by Kevin at 10:21 PM

A co-worker and I were discussing that first place issue just a few days ago. Only once since 1997 have the O's been in first after the end of April - in 2005 before the great second half collapse.