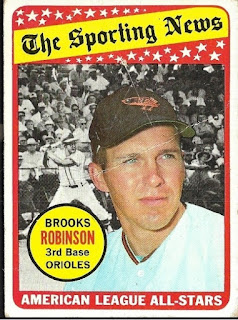 There's a few things to unpack with this Brooks Robinson All-Star card. First things first: yes, it's very well-worn. It's entirely possible that somebody tried to make an origami crane out of ol' Brooksie. You might also notice that his cap looks pretty old-fashioned. Indeed, the Orioles last wore those black caps with the chicken-scratch-looking bird way back in 1965. As with many other cards in the 1969 set, this presumably has something to do with the Marvin Miller-orchestrated player boycott of Topps photographers that spanned the 1967 and 1968 seasons. (More information here.) Lastly, there's the background image. When I first grabbed this card from the binder tonight, I thought it was an early example of an action photo on a baseball card. But a closer look reveals an odd painting effect. Your guess is as good as mine. The back of the card is a piece of a photo puzzle of legendary Red Sox left fielder Carl Yastrzemski. It's most of his cap, with the familiar Boston "B". I'm not including a picture here, because it's just a disembodied hat. I have my limits.
Posted by Kevin at 11:58 PM

Here is the full picture of the Yaz puzzle.

I forgot all about these cards. Thanks for showing and also for Jim doing a followup. Noticed you had comment on this back in 2013 Jim. Good memory