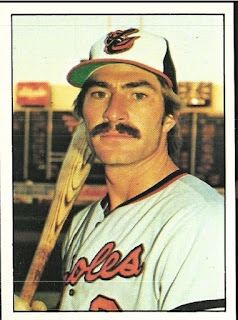 As I mentioned in a recent post, I happened to find a copy of an old ABC “Monday Night Baseball” broadcast (complete with the original commercials!) on YouTube. It featured the Orioles hosting the AL West-leading Royals at Memorial Stadium on August 30, 1976. Warner Wolf and Hall of Fame pitcher Bob Gibson, who had just retired at the end of 1975, were the announcing team. Because I miss baseball just this much, I decided to watch the whole thing and time-stamp my observations. I did not look up the box score ahead of time, so I’m going in spoiler-free. Follow along if you so desire. Enjoy!

1:22 – Lineup introductions are handled by the players themselves, with the Kansas City starting ten (including the DH) parading on-camera one-by-one and awkwardly mumbling their name, position, and hometown. The highlight is the camera suddenly panning down from 5’11” second baseman White to 5’4”, 140-pound shortstop Freddie “the Flea” Patek.

2:57 – As the Orioles’ defense is shown warming up, Wolf mentions that Doug DeCinces, in his first full season in the majors, is starting at third as the heir apparent to Brooks Robinson. It’s wild to think that Brooksie was still hanging around at the time.

5:20 – Left fielder Jim Wohlford steps into the box as the first batter of the game, facing lefty Rudy May. The on-screen graphics show each batter’s age, hometown, and years of big league experience, as well as basic batting stats (AVG, HR, RBI). It’s a very different information set than we’re used to now.

5:58 – Wolf points out that Amos Otis completely smears away the right-handed batters’ box as he comes to the plate. No respect for the grounds crew!

7:16 –After Otis singles up the middle, George Brett comes to bat, carrying a .486 (17-for-35) average against the O’s. Ouch. Fortunately, he bounces into a force play at second base.

15:42 – Reggie Jackson takes his first at-bat, receiving a smattering of boos from the sparse Monday night crowd that is noted on play-by-play. Reggie is quoted as saying that he doesn’t mind being booed, because “it means they’re paying attention to me”. That seems on-brand. He drops a single over the infield and promptly steals second base before Lee May strikes out to strand him there.

19:52 – Vintage commercial update: Bob Hope for Texaco Motor Oil, with “In the Summertime” by Mongo Jerry as the music accompaniment.

24:00 – There are a ton of invisible fans sitting in the yellow bleachers. If I didn’t know better, I’d swear the Baltimore fans were practicing social distancing.

24:46 – Back-to-back doubles by Al Cowens and Frank White give KC an early lead.

34:50 – It’s reported that the Royals call manager Whitey Herzog “Stein”, short for “Frankenstein”. That one’s new to me!

36:40 – With Kansas City eight games ahead of Oakland in the West and the Yankees 11.5 up on the Orioles, the ALCS seems like a foregone conclusion. It’s noted that the Royals took the season series from New York, 7-5. Of course, the Yanks would scrape by in five games in the postseason series (which was then best-of-five).

41:52 – Wohlford is caught stealing second base by O’s catcher Dave Duncan, who is playing out the last season of his 11-year MLB career. He should get into coaching or something.

48:58 – Mickey Mantle hawking an athlete’s foot treatment (NP-27). I guess a paycheck is a paycheck.

51:08 – It’s the always-fun May-to-May putout, as Rudy corrals a comebacker from league-leading hitter Hal McRae and Lee digs out a low throw at first base.

53:16 – John Mayberry is credited with 12 game-winning hits for the Royals. I had assumed that the oft-derided “GWRBI” statistic hadn’t come about until the 1980s.

54:58 – Bob Gibson claims to have been used as a pinch runner “lots of times”, until he got injured doing so and the practice was discontinued. His career splits do show that he scored 14 runs as a pinch runner.

1:01:28 – We see that Reggie has tied an American League record in 1976 with a six-game home run streak. As you may know, that record was broken in 1987 by Don Mattingly, who ended up tying Dale Long’s MLB record with homers in eight straight games (Ken Griffey, Jr. tied Mattingly in 1993). Reggie’s streak is still an Oriole record, tied by Chris Davis in 2012.

1:05:54 – The Birds are finally on the board in the bottom of the fourth, as Bobby Grich singles, Lee May doubles him to third base, and Singleton brings him home with a groundout. We’re tied 1-1.

1:10:45 – Incredible backhand in the hole by Mark Belanger, who guns it across the diamond to put out KC catcher Buck Martinez by several steps. He didn’t last 18 years in the majors with a .580 OPS for no reason.

1:15:14 – Just like that Kansas City takes the lead back, thanks to a two-out double by Wohlford and a seeing-eye single by Amos Otis. 2-1.

1:17:16 – As Dave Pagan warms up in the Oriole bullpen, we see Mike Cuellar (sans hat) shuffling around behind him.

1:19:11 – A pregame interview with KC starting pitcher Andy Hassler is shown, discussing his 18-game losing streak, which spanned two seasons and wasn’t snapped until a few weeks prior to this game, shortly after he’d been traded from the Angels.

1:27:50 – Another pre-recorded segment, as Rudy May tells the story of tripping over his dog in the middle of the night and breaking BOTH arms. Man’s best friend, indeed.

1:30:11 – Some great curmudgeonly commentary from Gibson, as he retells the story of a Roberto Clemente comebacker that broke his leg, and somehow spins it into a defense of raising the mound back to its 1968 height. Then Warner Wolf mentions Gibson returning to pitch against Boston in the World Series, and needles the future Hall of Famer about giving up a home run to opposing starter Jose Santiago in Game One in Fenway Park. Bob shoots back, insisting it was a pop-up that sailed over the cozy fence in Boston’s home park. I can see why he’d be so salty, as that solo homer was all that kept Gibson from a complete game shutout.

1:37:30 – Leading off the bottom of the sixth, Harper draws the first walk of the game for either team.

1:39:32 – Grich blasts a double to the center field wall, scoring Harper with the tying run. 2-2. As Rick Dempsey would say, walks will kill you every time.

1:42:02 – Lee May booms another deep fly ball, caught by Otis. Grich (who had moved up on a Reggie Jackson grounder) tags from third and scores, giving the O’s a 3-2 lead. It’s Lee’s 84th RBI, tying him with the Yankees’ Chris Chambliss for the league lead.

1:56:04 – With DeCinces batting, Wolf talks about how he was almost traded to the Mets prior to the season for Rusty Staub. I’d never heard that, either!

2:02:26 – With one out in the bottom of the seventh, the Orioles finally chase Andy Hassler with a Paul Blair single. That moves DeCinces, who walked to lead off the frame, to second base. Mark Littell enters from the bullpen on…the cart!

2:07:00 – On Littell’s second pitch, DeCinces is thrown out at third base on an attempted double steal. Now you know why Earl Weaver didn’t like small-ball.

2:11:14 – Tony Muser, future manager of the Royals, enters the game for Baltimore at first base, replacing Lee May.

2:14:02 – As Warner Wolf notes, back-to-back flyouts to Ken Singleton mean that Rudy May has held KC’s two most dangerous hitters (Brett and McRae) to a combined 0-for-8, while giving up nine hits in all (UPDATE: 11 hits).

2:17:43 – May escapes the eighth inning, stranding two runners after Frank White hits a tapper to Grich. Moments earlier, White had been admonished by home plate umpire Joe Brinkman for having too much pine tar on his bat. Do you think George Brett was paying attention?

2:31:00 – Bob Gibson cracks that Cookie Rojas “has been 37 years old for about 37 years”, but the Royals’ pinch hitter gets the last laugh with a single. That’s 12 hits allowed by Rudy May in eight and one-third innings.

2:34:05 – Amos Otis gives the ball a ride, but Paul Blair barely moves before snagging it for the final out. O’s win 3-2 (box score and play-by-play), despite being outhit 12-5. Rudy May gets the complete game win to improve to 11-9 with a 4.01 ERA. Despite scattering those dozen hits, he didn’t walk a single batter. He also only had three strikeouts, so he kept the defense on their toes.

2:34:58 – Marvelous Marv Throneberry sighting! A Miller Lite commercial. That seems like a good place to end this.

With the commercials??? Love it.

I've been enjoying viewing the old games, but I admit there is too much The Greatest Games out there. I try to find something random such as this. I'm at a stage where I most want something as basic as the Twins and Brewers in May, 1984, please.

Night Owl - I have an MLB.tv subscription (a season ticket holder perk), and I've turned off the score bug. So I can pick a random game from any date in 2019, and the result isn't spoiled. Yesterday I saw the Dodgers win a 3-2 squeaker in Arizona.