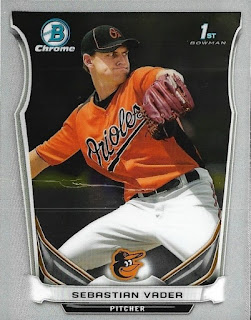 It's been ten years since the Orioles drafted Sebastian Vader with their 18th-round draft pick, and I'm still disappointed that someone with such a first-rate name didn't make it to the major leagues. Vader spent six seasons in pro ball, all in the Baltimore organization, but never so much as reached AA. He totaled just 80 games (68 starts), with a 24-24 record and a 3.31 ERA. Dr. Google tells me that the righty from California dealt with shoulder problems in 2015, and retired the following spring, leaving the Orioles' promotional team lamenting the Star Wars tie-ins that could have been.
Posted by Kevin at 11:29 PM