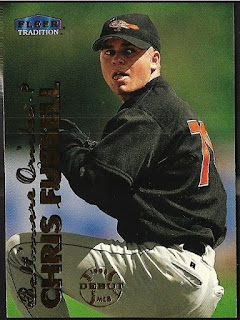 Yes, I know what you're thinking. It may have taken twelve years, but I finally got to Chris Fussell. The only thing I can recall about Chris Fussell without doing any research is that the Orioles traded him to Kansas City for Jeff Conine, which was a nifty little deal. Looking at this card, I can also tell you that he threw right-handed, and debuted in the majors in 1998. There, I've already tripled my knowledge!

So, what else is there to know about Chris Fussell? Well, his middle name is "Wren", he's from Oregon (a town in Ohio, not the state), and the O's drafted him out of high school in the ninth round of the June 1994 draft. He split the 1998 season between AA Bowie and AAA Rochester, ranking second in the organization with 135 strikeouts in 151.2 innings. He was the starting pitcher in his MLB debut against the Rangers on September 15. Things were looking good through five innings, with the Baltimore offense handing the 22-year-old a 5-0 lead. Fussell had struck out five hitters and the defense turned two double plays behind him, limiting the damage from three walks and a pair of singles. The first three Texas hitters reached in the sixth, which brought an end to the rookie's evening. Pete Smith and Arthur Rhodes conspired to allow the inherited runners to score, leaving Chris with a final line of three runs allowed in five innings. Still, the Birds clung to a one-run lead all the way until the ninth inning...when Armando Benitez served up a two-run homer to Ivan Rodriguez to blow the save and a potential win for Fussell. The young righty was hit harder in two subsequent appearances that season, finishing his Orioles career 0-1 with an 8.38 ERA.

After the April 1999 trade with the Royals, Fussell appeared in 37 games for K.C. over the next two years, racking up a 5-9 record and a 6.79 ERA. He had surgery in 2001 to remove bone spurs from his elbow, and never made it back to the big leagues after that. He did pitch in the minors and independent ball for another seven years, calling it quits after putting up a 6.39 ERA in 24 relief appearances for the Dodgers' AAA Las Vegas club in 2007.

Jeff Conine, on the other hand, earned 7.1 WAR (by Baseball-Reference's metric) in the better part of five seasons before an August 31, 2003 trade to the Marlins. So yes, that's a small-scale win for the O's.
Posted by Kevin at 11:19 PM

I recall going to an O's game in the early-2000s and Jeff Conine's walk-up song was "Tom Sawyer" by Rush. And now that I think about it, former O's catcher Gregg Zaun used to have "Limelight" as the song that played when you loaded his website. I don't think this means anything, though.