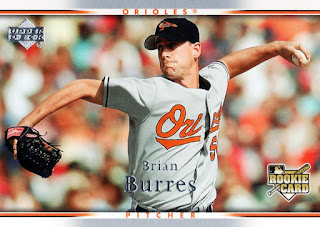 Happy 39th birthday to Brian Burres, the second-best lefty pitcher to ever appear on an Erik Bedard card. Brian last appeared in the majors with the Pirates in 2011, but he didn't throw his last pitch in pro ball until 2016. Unbeknownst to me (at least until I rung it up at Baseball Reference just now), Burres plied his trade for three seasons with the Atlantic League's Southern Maryland Blue Crabs. In 63 games (59 starts), he had a 22-20 record with a 3.34 ERA. His 1.35 WHIP was a bit less impressive, but he allowed only 21 home runs in 339.1 innings. It's just another reminder that even the major leaguers with the least remarkable resumes are still great athletes.
Posted by Kevin at 10:45 PM