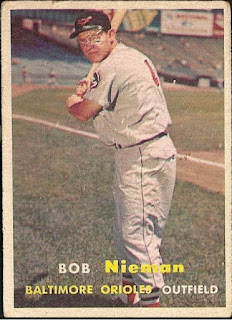 I would like to apologize to Bob Nieman on behalf of whoever gouged up his face in the fifty or so years before this card came into my possession. Surely, that's no way to treat the first Oriole regular to ever bat .300 in a season. As you may be able to see, Nieman also wore number four, one of the few players to do so before Earl Weaver claimed it for perpetuity. (Hall of Famer/Brooks Robinson mentor George Kell was another, and first baseman "Diamond Jim" Gentile was the most well-known.) Additionally, Bob worked for several big league clubs as a scout from 1967 through 1984. He had a hand in the Indians drafting and signing John Lowenstein in 1968, incidentally.

One last note: I swear that I chose this card at random, but once I started doing the subsequent research, I found out that Bob Nieman died in 1985 age 58 in...Corona, CA. There are coincidences everywhere when you're looking for them.
Posted by Kevin at 10:27 PM