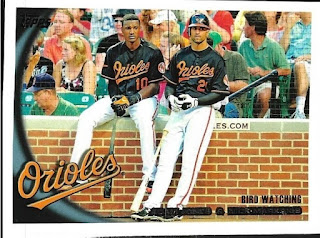 Ten years later, it's funny to look at this card and realize that Nick Markakis is still in the major leagues and Adam Jones is not. Amidst all of the upheaval of the past few years, the biggest blow to me as a fan was when the Orioles parted ways with AJ before the 2019 season. It was all the worse because there was no clean break; while Adam remained an unsigned free agent throughout the winter, new GM Mike Elias was careful not to say anything one way or the other about a potential reunion. It was up to the fans to read between the lines - at least until March 11, when Jones finally signed a one-year deal with the Diamondbacks. With a stroke of the pen, his 11 years as a Baltimore fixture came to an end. He left behind a legacy of five All-Star appearances, four Gold Gloves, and a position of leadership in the clubhouse and the community.

Meanwhile, the 36-year-old Nick Markakis is somehow plugging along with the Braves, preparing to spend his sixth season in Atlanta when and if the season gets started. He's batted .284/.359/.403 in his half-decade in the National League, essentially swapping some of his already-modest home run numbers as an Oriole for more doubles. He's up to 2,355 career hits in 14 seasons overall, and his next two-base hit will make a nice round 500.

As we hover indefinitely on the verge of a 2020 MLB season, Baltimore's projected outfield is some combination of Dwight Smith, Jr., Austin Hays, Anthony Santander, and (pending his own health and the ongoing sad saga of Chris Davis at first base) Trey Mancini. Based on their collective potential and 2019 performances, it's actually one of the better segments of the Oriole roster. But a few years along, it's still strange not to see #10 and #21 in the center-right alley in Camden Yards.
Posted by Kevin at 10:59 PM