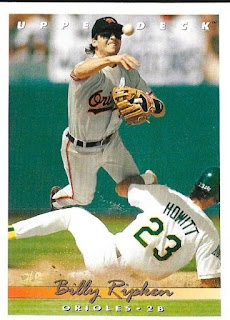 Hey, it's been a while since I've sleuthed out a baseball card photo, so let's jump on it. Orioles at Oakland, Billy Ripken attempting to turn the double play with Dann Howitt sliding into second base. My first stop is Billy's 1992 game log on Baseball Reference. He played four road games against the A's that season, all starts at second base. The two later-season options (August 31, September 1) didn't include Howitt, so that narrows it down to May 30 and 31. Incidentally, Howitt was erased at second on a twin killing in each of those games, but the play-by-play from May 31 indicates that Cal Ripken made the putout. So, May 30, 1992 is our winner.

It was a Saturday afternoon game, with the marquee pitching matchup of Jose Mesa vs. Joe Slusarski. Two first-inning Baltimore runs were matched by a pair of Oakland tallies in the second, with Dann Howitt himself delivering an RBI single for the tying run. Then Mike Bordick tapped a ground ball to O's third baseman Leo Gomez, leading to the double play that is captured on this very card. The teams remained deadlocked until Brady Anderson put the Birds on top with a solo home run in the top of the fifth. The visitors extended the lead with a four-run outbreak in the sixth via two more homers - a leadoff solo shot from Sam Horn and a three-run blast by Chito Martinez. That 7-2 cushion didn't last long, though. The Athletics crawled back with two-spots in the seventh and eighth innings each; Randy Ready's pinch hit two-run homer off of Mike Flanagan closed the gap to a single run and necessitated a six-out save from Gregg Olson. Fortunately, the Otter was up to the task, pitching around two hits and a walk to secure his 11th save. O's win, 7-6. "The more you know..."
Posted by Kevin at 11:20 PM

I lived in Alameda from 91-93. When the O’s were in town for the weekend, I would catch at least one game. So probably a 50-50 chance I was at this game. Thanks for sleuthing this out, always love to know when these action shots occurred.