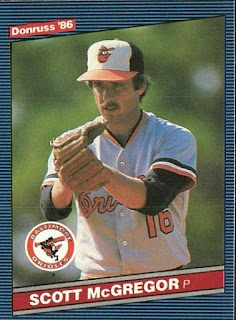 There's something reassuring about picking up a stack of ugly-ass mid-eighties Donruss cards 35 years later and learning new things. From flipping this card over and reading the back, I discovered that Scott McGregor's middle name is "Houston". He grew up in California, so he wasn't named after his hometown. I've also learned that as of 1986, Scotty was living in Phoenix, MD - 14 miles away from my current domicile. Oddly enough, he was also a switch hitter. He never batted in the regular season, but did step to the plate 11 times in World Series play. He went 0-for-9, but did walk twice and score once. So that's a .182 on-base percentage...which is probably better than I managed in little league.
Posted by Kevin at 11:02 PM

I remember McGregor batting in the WS. Not good.

Also, I am applauding your courage to accurately call 1986 Donruss ugly-ass. Too many rose-colored glasses viewpoints with that set.

Night Owl, I cannot imagine being nostalgic for 1986 Donruss, when you've got the brightly colored bold team names of 1986 Topps right there.