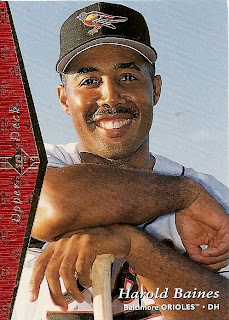 With Harold Baines joining the ranks of the Orioles Hall of Fame this evening, I thought I'd share a few facts that you may or may not know about the soft-spoken Eastern Shore native.

-Hit .532 as a senior at St. Michaels (MD) High School in 1977, and was named an All-American and selected as the first overall pick in the amateur draft by the White Sox.

-Slugged his first career home run on April 19, 1980 off of none other than Jim Palmer.

-Had his number (3) retired by the White Sox while still an active player; they gave him the honor in 1989 after trading him to the Rangers. Harold returned to Chicago for two more stints as a player and one more as a coach, and each time the Sox "unretired" his number.

-Every January 9 in St. Michaels is designated as Harold Baines Day.

-His 1,628 runs batted in are the most of any player eligible for the Hall of Fame who has not been elected.

One of my all-time favorite cards of Harold as an Oriole!

Steve - It is a good one. My favorite might still be the 1993 Studio card.

That's a real good one too! Tough decision!