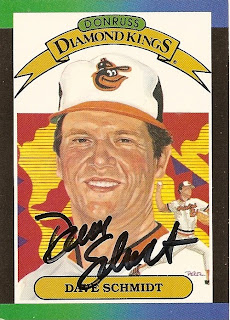 Last night was a pretty good night for a baseball game. If I'm being completely honest, I only decided to go to Oriole Park because of the celebration for the 1989 "Why Not?" Orioles. But I got much more than I expected.

I was at the ballpark at 4:30, in plenty of time to buy the tickets and meet my friend Geoff at 5:00. We went across the street to Pickles Pub and caught up over a few beers, then made our way into the stadium and crossed the concourse to the Orioles Alumni booth, where 1989 team members Mike Devereaux, Dave Schmidt, Mickey Tettleton, and Dave Johnson were signing autographs. Naturally, I was well-prepared with a handful of cards from my collection, including artist Dick Perez's technicolor take on Schmidt, which you can see above. It was a fun moment, especially with the much-beloved "Why Not?" highlight video playing on the left-center field video board. "Devo" in particular looks like he could still be playing today. I made sure to mention to Johnson that we used to go to the same dentist in Middle River. He seemed bemused, responding, "Oh yeah?".

Geoff and I found our seats in the upper deck and watched the bittersweet conclusion to the 1989 video (stupid Blue Jays) and chowed down on some fine stadium fare, and settled in for the beginning of the game. We probably weren't optimistic to start with, and when the O's immediately fell in a 2-run hole thanks to some sloppy play, it looked even worse. The last thing they needed was an early deficit against Jered Weaver, who entered with a 12-3 record and a run of three straight games with ten-plus strikeouts.

So I guess you could say that I was completely caught off guard by a historic night by the Baltimore offense. Six runs in the first, seven more in the seventh, 16 total on 19 hits. They tied team records with nine doubles and a dozen extra-base hits. Brian Roberts had three of those doubles, boosting his major-league-leading total to 43. He has a good shot to break his own club record of 51 two-baggers in one season. Everyone in the lineup had at least one hit, and only Nolan Reimold didn't drive in at least one run. Did I leave anything out?

Oh yeah...the much-maligned Felix Pie, reduced over the past few months to sparing fourth outfielder status, started in left field to allow the sore-legged Nolan Reimold to DH and to give the flu-ridden Luke Scott a night of rest. After allowing a run to score on a wild throw in the first inning, Felix more than redeemed himself with a subsequent diving catch of a low liner as well as a four-hit evening. He became just the fourth player in Baltimore history to hit for the cycle, joining Brooks Robinson, Cal Ripken, Jr., and Aubrey Huff. He pumped his fist and pointed to the Oriole dugout after legging out a triple to clinch the cycle, took a curtain call between innings, and of course endured the customary shaving-cream pie to the face during his post-game interview. A pie for Pie, as many have noted.

All in all, an evening well spent.
Posted by Kevin at 1:23 PM

I just feel so bad for Mike Scioscia.