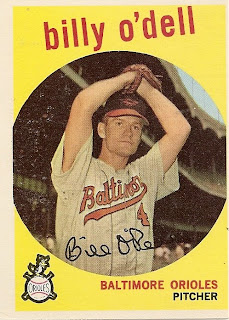 Did you know that the foul lines in Baltimore's old Memorial Stadium used to be wooden slats painted white? Well, they were, and that proved crucial in a 2-1 win over the White Sox on May 19, 1959.

The game was a classic pitcher's duel, pitting Chicago's one-time 20-game winner Billy Pierce against 27-year-old Billy O'Dell, who was on his way to a second straight All-Star Game. Both clubs were off to a good start: the White Sox, who were 21-12, would eventually win the American League pennant, while the young O's were 19-14. Baltimore eventually faltered, but laid the foundation for a surprising 89-win season the following year.

In the bottom of the second inning, Pierce got the first two Oriole batters out before walking second baseman Billy Gardner (lots of Billys in this game!). That brought O'Dell to the plate. The pitcher wasn't much of a threat with the bat (.125 career average), but on this occasion he sliced the ball about 120 feet down the first-base line. It struck the wooden plank squarely and bounced all of the way over the head of Pale Hose right fielder Al "Fuzzy" Smith. By the time Smith chased the ball down and threw it in, Gardner and O'Dell had circled the bases. It was the strangest of home runs, the second (and last) round-tripper that O'Dell ever hit, and it won him the game. He allowed just one run in seven innings, and reliever Jerry Walker closed out the 2-1 victory.

Interesting! How long did have the wooden slats?

Love the old "Baltimore" jersey on that card. glad to see they brought it back.