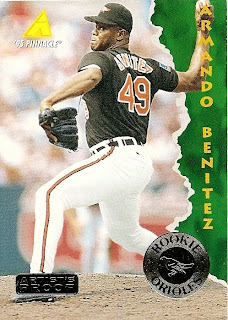 Geez, hard-throwing relief pitchers apparently have more staying power than Jason Voorhes. You may have exhaled earlier this summer when I mentioned that volatile ex-Orioles closer Armando Benitez was plying his trade with the Newark Bears of the Atlantic League, a safe distance away from affiliated pro baseball. But many former major leaguers have come to see this independent league as a springboard back to the big time, and you'll probably recognize a few other names on Newark's roster if you give it a look. For his part, Benitez led the club in saves with 16, allowed opponents to hit only .171 off of him, and struck out 43 batters in 34 and two-thirds innings. Remarkably, the big right-hander is still only 36 years old. Keeping all of this in mind, I suppose it was just a matter of time before somebody came calling.

Yesterday, the Houston Astros did just that, signing Armando and placing him with the AAA Round Rock Express. I would imagine that he might be in the majors when rosters expand in September, at which point opposing batters in the National League will be digging in and hanging out over home plate at their own risk. Should he take to the mound for Houston, it would be his eighth team in a sixteen-year career. He's unlikely to take any save opportunities away from Jose Valverde, but the 300 save milestone is within reach; he's currently sitting at 289.

If you're a 'Stros fan and you're cringing at the thought of Benitez melting down for your home team, or an O's fan who's already reliving the horrors of American League Championship Series past, just remember that it could be worse: the playoff-hopeful Rockies already have Adam Eaton in their bullpen, and just signed Russ Ortiz this weekend. The National League really is something else.
Posted by Kevin at 5:39 PM

Russ Ortiz...LOL. I have better stuff.

Bob - That reminds me of a quote from ESPN's Keith Law this weekend. He was at the Rockies-Giants games, and said that he was glad he'd flown 1750 miles to see Adam Eaton throw his 85mph nothingball.

Tigers68 - Hey, MLB is the land of second chances and then some. Think of the late Steve Howe and his seven drug suspensions.