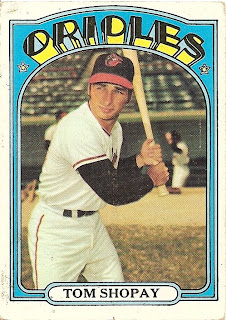 "Why are baseball cards so attractive to kids and adults?"
"I can only speak for myself. Years ago that was a source of information. Stats were always big. They were an educational index card. You read all the little small things that were on the back of the card. You'd get the image and you could hold in your hand and play with. The trading element was pretty cool. I was an Orioles fan … seems like it took me forever to get Brooks Robinson. I had a whole bunch of Tom Shopays."

The preceding quote is an excerpt from a brief interview that Cal Ripken, Jr. recently did with USA Today's Game On blog. There are some other great bits about card collecting and his career. But really...don't you pity poor Tom Shopay? Here's a guy who scratched and clawed for his entire pro career, a 34th round draft pick of the Yankees who made it to the majors in his third pro season and did just enough to hang on a little longer and a little longer...eleven years in pro ball distilled to a total of 253 big league games spread across seven seasons. He hit only .201 in the bigs with three home runs (just one of those in his 245 career games as an Oriole), but doggone it, he made it all the same. Then, 33 years later, the most famous player in team history comes out and tells the world what a bummer it was to pull a fistful of Shopays from those old waxy packs of Topps. They were just fodder for his bike spokes while he waited anxiously for Ol' Brooksie. That's gotta sting.
Posted by Kevin at 11:58 PM

Wow, as if the Ironman's remarks weren't bad enough! Koji's comments are even worse.

The only part of his comment that made any sense was "SEX"...then after that, it's all gibberish.

William - Yeah, I guess something had to keep Tom in the majors year after year if it wasn't his bat.

I worked w/his daughter Bethany like 20 years ago.She was hot.

My Dad,(Dick Lugg) coached Tom in little league in Bristol,Ct.,always had good things to say about a local kid making it big!,Loren Lugg