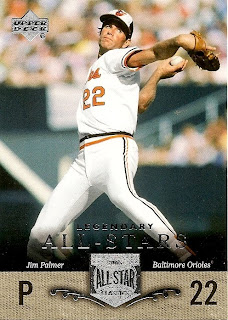 No lies - this may be the coolest Jim Palmer card that I've ever seen. A crystal-clear full-color shot of one of the greatest pitchers of all time at the most physics-defying point in his classic deep-kick windup. The picture was taken sometime during the last decade of his career (1975-1984), judging from the uniform. It was obviously at Memorial Stadium, which is always a bonus. Even the design is regal and understated, which isn't always a given with Upper Deck. Two thumbs up!
Posted by Kevin at 4:00 PM

You're right. They did wonders with that photograph, bringing it up to date in terms of sharpness and contrast. Nice find!

Kevin...not sure that is Memorial Stadium in the background...I don't recall those angles in the layout

Looks like '80 or '81 Palmer to me. And that is definitely Memorial Stadium.

Craig - He's wearing the home whites, and there's no way that's a spring training park from the size of it.

FTB - I can't imagine where else he'd be pitching at that time.