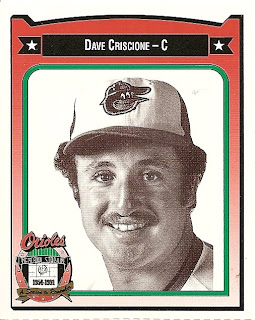 I believe I promised you a Dave Criscione story, and a Dave Criscione story you shall have. David Gerald Criscione was born in Dunkirk, NY, and attended Dunkirk High (go figure) before signing with the Senators in 1969 as a fifth-round draft pick. Despite flashing a solid bat at every minor league level, he spent seven years in the Washington (and later, Texas) organization without ever sniffing the major leagues. After hitting .293 with 15 home runs at AAA Sacramento in 1976, he was traded to the Orioles for another minor league veteran, pitcher Bob Babcock. It was more of the same in 1977 for Dave, who spent the first half of the year at AAA Rochester...until fate intervened.

In mid-July, an injury to catcher Rick Dempsey left the O's shorthanded behind the plate. The 25-year-old Criscione was promoted with little fanfare. He made his debut on July 17 as an eighth-inning defensive replacement, but hit a shallow flyout the following inning to end the game and strand the potential tying and winning runs. A few days later (July 21, to be exact), his wife Marge gave birth to the couple's first child, daughter Keri Lee. Dave appeared in each of the next two games, but only for an inning in each. But Sunday the 24th, a doubleheader with the Brewers gave the rookie his first opportunity to start. In the second game, he caught all nine innings and had his first two career hits, a pair of singles. The appreciative Baltimore fans gave him a standing ovation for each hit, and another in the eighth inning when he sacrificed Doug DeCinces to third base. Two batters later, Elliott Maddox hit a sac fly to score DeCinces with the eventual winning run. That would prove to be Criscione's only start in the big leagues, but not the greatest moment of his brief career.

Monday's game against Milwaukee went into extra innings tied at three. In the ninth, manager Earl Weaver had pinch-hit for starting catcher Dave Skaggs, so Criscione had to enter the game in the tenth frame. The game wore on into the eleventh, and with one out in the bottom of the inning young Dave strode to the plate to face Brewers reliever Sam Hinds. All he did was blast the game-winning home run to send Memorial Stadium into delirium! It was Criscione's first and last home run and RBI, as well as his last hit and last at-bat in Charm City. He played two more road games for the O's, going 0-for-3, before being sent back to the minors for good with a career average of .333 (3-for-9). He hung up his spikes after the following season (also spent at Rochester), but he can spend the rest of his life telling friends, family, and strangers about that one memorable week in the summer of 1977.
Posted by Kevin at 5:05 PM

Fun to read this! Dave is my brother Ryan LaMattina's father-in-law. Ryan was picked up by the Brewers and played on their farm team in Victorville, CA before being released following rotator cuff surgery.
Michelle LaMattina Mullen
Milwaukee, WI