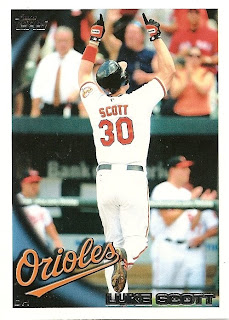 Yesterday, my girlfriend Barbara and I started our Valentine's Day off right with breakfast at a small cafe near her house, followed by a quick and relatively bloodless trip to Wal-mart. I've been holding off on buying new cards, hoping vainly that I could do a better job of organizing and storing the ones I already own before I move into my new house next month, but I just had to dip my toes in the water. So I grabbed a 36-card rack pack of 2010 Topps on our way to the checkout, and tore it open as soon as I got in the car.

The card you see above was the first Topps card of the new year for me. I'm hoping it's a good omen, particularly since it took me so blasted long to pull an Oriole out of 2009 Topps last year. As for the card itself, it looks great. I like the design, with the Orioles script large enough to be distinctive, yet placed somewhere relatively out of the way. The little vortex design thingy on the left side of the photo is decent, too. The photo, with Luke Scott celebrating what was likely a home run by giving a little dap to the man upstairs, is pretty unique. You'd probably prefer to see Luke's smiling face, but the picture is framed well and I do like being able to see his name and number on the back of his jersey.

I wish I could place this game, but my best guess is that it's a day game and is not taking place on a Friday (otherwise the O's would have their black alternate jerseys). I think the mook in the second row is wearing a red alternate Red Sox jersey, so we could give him the benefit of the doubt and suppose that the Sawx are the visiting team. If Scott has just gone deep, that narrows it down to two games. On July 1, he took Josh Beckett deep in an eventual 6-5 Oriole loss. On September 20, he touched up Daisuke Matsuzaka in a 9-3 loss. But then again, maybe it wasn't Scott that delivered the big hit. After all, the players in the dugout still seem to be looking out toward the field and applauding another teammate. Ah well, I'm just happy to have this card in my collection.

By the way, I typed in my code for the Million Card Giveaway that I received in this pack. My prize? A 1988 Topps Juan Samuel that I already have. Just another reason for me to dislike the much-maligned current third base coach of the Birds.
Posted by Kevin at 11:50 PM

I love trying to figure out mysteries like this. I bet it's the HR off Beckett. Watch the video of the HR here; you'll see he makes that exact gesture in what seems to be roughly the same spot. The day seems to be overcast, or at least not brightly sunny, and that one player who's looking off to the right on the card is probably looking at the teammates who are ready to greet Scott when he returns to the dugout.

The HR off Dice-K is here, and not only is that a sunnier day, but there was a runner on base and Scott's gesture to the sky was on the plate and with one hand. It cuts out before we see if he does it again with both hands, but I think the brighter day rules out this one.

I've pulled this Luke Scott card 3 or 4 times now. It seems to be in a series of cards with Alexei Ramirez and Brett Anderson that pops up over and over.

Dan - Good detective work! I remember the first game. It was the day after the O's wiped out a 10-1 deficit to stun the Red Sox, and we gave it right back. Brad Bergesen left after 8 innings with a 5-1 lead and the bullpen collapsed...with a little help from a suddenly shrinking strike zone. Sigh.

Night Owl - Now that you mention it, Ramirez and Anderson were also in my rack pack!

i guess i can take the luke scott out of the O's pile for you (since i have gotten that sequence a couple times myself...)