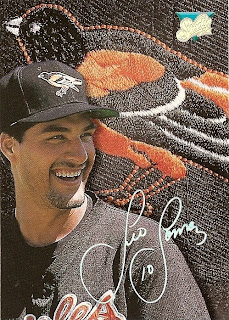 When I thumb through my cards and come across Leo Gomez, in my mind I hear Jon Miller's stentorian bass announcing, "LAY-o Gomez". It sounded a little ridiculous, but it just rolled so fluidly off of his tongue...he made it work. My formative years as a baseball fan were spent listening to the avuncular, rotund Miller on WBAL. If I had known that he would be walking out the door after the 1996 season, bound for San Francisco, I might have listened more often and more closely. Instead, I have to settle for hearing him work the mic once a week - Sunday nights on ESPN. Usually that means that I also have to choke on the insipid burbling of Joe Morgan. But that's the kind of risk that I'm willing to take to listen to Jon Miller.

Today, Jon was selected as this year's recipient of the Ford C. Frick Award for his achievements in baseball broadcasting. On July 25, he will be inducted into the Baseball Hall of Fame in Cooperstown, NY. He will join several golden-throated greats who have previously received the honor, including the late, great Chuck Thompson, one of his former partners at WBAL. I can't think of anyone more deserving, and I can't wait to hear his speech.
Posted by Kevin at 8:31 PM

I like Jon Miller, although his announcing for the Giants kind of tarnishes him in my eyes.

The thing that I notice when he's on ESPN is he's not his usual self. He always seems to be forced to talk about some topic that ESPN producers dictated MUST BE DISCUSSED during that game. It really takes away from the flow of the game, and what he does best.

night owl - Oh, I would definitely agree. I get the sense sometimes that he's going along to get along on those telecasts, but I suppose I would too for that kind of money.

In the team's history we as Oriole fans have had the honor to hear Jon Miller, Chuck Thompson and Bill O'Donnell. (And Rex Barney, too!) Doesn't get any better than that.

I have to second your comment! We have been blessed! Is it more than coincidence the slide the O's have had since Jon Miller's departure!?!