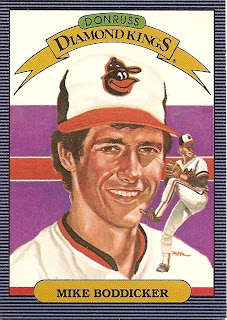 The Orioles sure waited until the last possible moment, but word has finally leaked out that they've secured a TV announcer lineup for the 2010 season. There are plenty of familiar names to O's fans, including a couple of surprises.

It was presumed that the only change would be a replacement for Buck Martinez, who handled the analyst job when Jim Palmer was elsewhere. Indeed, Mike Flanagan is returning to the broadcast booth to replace Buck, which I'd easily consider an upgrade. But Palmer's going to have a little extra company. Joining Jim and play-by-play man Gary Thorne on MASN telecasts will be a rotating third man from a four-man roster.

The third bananas will include Brady Anderson, Mike Boddicker, and Eddie Murray, all of whom are intriguing choices for various reasons. Brady certainly seems to enjoy talking, but lives in California. I wonder how many trips he'll be taking cross-country. Boddicker seems to have lived a fairly quiet life since retiring in 1993 and going home to rural Kansas. Eddie, of course, was never noted for being outgoing with reporters during his career, but I can't say that I blame him. He definitely had more personality when interacting with teammates, and I'm in favor of having more of #33 in my day-to-day life. The rumored fourth guy is none other than Billy Ripken, who actually seems like the most natural choice. He's local, he's outspoken, and he more or less knows his stuff.

If nothing else, the Orioles and MASN have gotten my attention. I'll be tuning in early and often anyhow, and I'm optimistic that they're on to something. Maybe they're working on making the current O's team more competitive by osmosis.
Posted by Kevin at 10:50 PM

I remember how my O's fan buddy and I would joke about Eddie never speaking. I mean we NEVER heard his voice. Then one day he gave a televised interview. We couldn't believe it. It was like waking up one day and having your cat say "Good Morning".

deal - Thanks for the link! That's a good story.

Bob - You should teach your cat to say "good morning", and maybe murmur something about home runs being rally killers. Fox might hire him to share the booth with Buck and McCarver.

I agree, Billy Ripken seems like the most natural choice and I think he'll do a good job. He's basically become a broadcaster now, anyway, with his work on Sirius/XM, etc. and he doesn't shy away from having an opinion. It's too bad I probably won't be able to get any MASN broadcasts here in Australia. I'll have to "settle" for Joe and Fred on my iPhone.