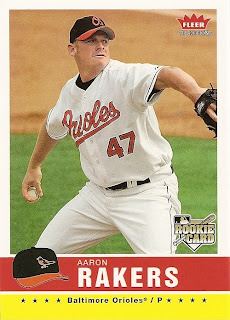 I can't believe that it took another card company 25 years to rip off Topps' so-simple-it's-sublime "hat design". I think I like it even better than the original, since it features the actual team logo. If you somehow missed the Aaron Rakers era in Baltimore, well...there wasn't much to miss. If I recall correctly, his surname is pronounced "rockers", as in the high-flying Shawn Michaels/Marty Jannetty tag team of 1980s vintage. Aaron was a 23rd round draft pick in 1999 who got his callup in his sixth year in the Orioles organization. At ages 27-28, he made 13 relief appearances for the club in 2004 and 2005, and pitched well enough: a 3.50 ERA and 14 strikeouts and four walks in 18 innings. He even picked up his only career win against the Yankees, bailing out Bruce Chen in a 17-9 slugfest in September '05.

Rakers' slim chances of a significant major league career were derailed by a torn labrum in 2006. He pitched a single inning for the Padres in 2007, then joined the ex-Oriole pipeline known as the York Revolution in 2008. At last check, he was continuing his pro career in Taiwan. Keep on keepin' on, Aaron.
Posted by Kevin at 11:02 PM