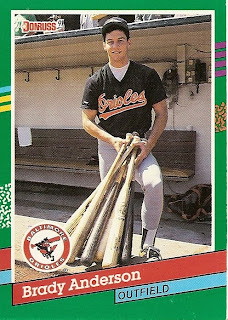 At the time that this card was printed, Brady Anderson was struggling to stay in the major leagues. He'd hit .216 in his first three seasons in the major leagues, with only eight home runs in 825 at-bats. The O's had sent him down to the minors at least once each season, and would do so again in 1991, when he batted .230 with 27 RBI in 113 games.

Now, I don't want to be an armchair hitting coach here, but maybe Brady would have had slightly better results if he weren't using seven or eight bats at once. I'm just throwing it out there.
Posted by Kevin at 11:54 PM

Another card I have...I'd put money on 'roids for Brady.

Brad - You can say that again.

William - You know, Jim Palmer let a similar opinion slip and caught hell for it...