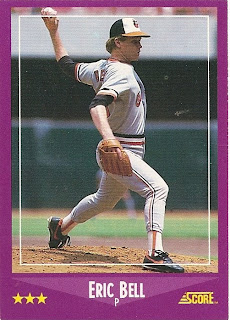 Well, my work had a two hour delayed opening today, so you get an uncommonly early post. It should be a nice change from the usual uncommonly late post.

I may have been a little snarky in my treatment of Eric Bell in last night's entry. After all, one of the things that I enjoy about writing this blog is finding the interesting little stories that define even the obscure players. There are a couple of tidbits on Eric's career stat line that grab my attention, and it would be impolite to keep them to myself.

In 1987, his first full season in the majors, he started 29 games for the Orioles. Only Mike Boddicker (33 GS) had more starts for the team. Aside from that rookie season, Bell had only five starts in the big leagues. Though he had a pretty lousy year, the youngster also scraped out ten wins. He tied for the team lead with Boddicker and Dave Schmidt. Sure, it took him 29 starts to eke out double-digit wins, but when you look at his 5.45 ERA (80 ERA+), 1.53 WHIP, and 1.42 strikeout-to-walk ratio, it's a wonder that he made it.

Bell debuted with the O's in 1985 at age 21, meaning that he was only 23 during that 1987 season. But even with the Baltimore roster in practical shambles in 1988, he started that season at AAA Rochester. He went 3-1 with a 1.98 ERA through seven games before getting injured. Elbow surgery cost him the rest of his season, and he languished in the minors for two more seasons before signing with the Indians as a free agent for 1991.

In September of 1991, the Tribe brought him up after the rosters expanded and he had an improbable hot streak. Four years after throwing his last major league pitch, Eric came out of the Cleveland bullpen and tossed 15 and 2/3 innings spanning eight games without allowing a single earned run. After the only batter he faced in his ninth appearance scored, he added another scoreless 2 and 1/3 innings in his final game of the year to wind up with a 0.50 ERA and 0.56 WHIP. Even more improbable, he played the vulture role, posting a 4-0 record in relief. In doing so he set a major league record for the most wins without a loss while pitching on a 100-loss team. As you might imagine, that was the peak of Bell's career. He began the 1992 season on the Indians' roster, but struggled and was shipped out in May. His 1993 season with the Astros mirrored the 1992 campaign, and he pitched his final big league game on May 8. The southpaw clung to his livelihood for three-plus more seasons at AAA, until a 4-14 season at Tucson in 1996 brought his pro career to a close at age 32.

Well, now I feel better. I hope for your sake and mine that there's a pub trivia quiz somewhere out there that has an Eric Bell Round.
Posted by Kevin at 8:59 AM

Waking up to see Eric Bell again I had to wonder if it was Groundhog Day again today.

Tim - I hadn't even considered that! I like the way you think.