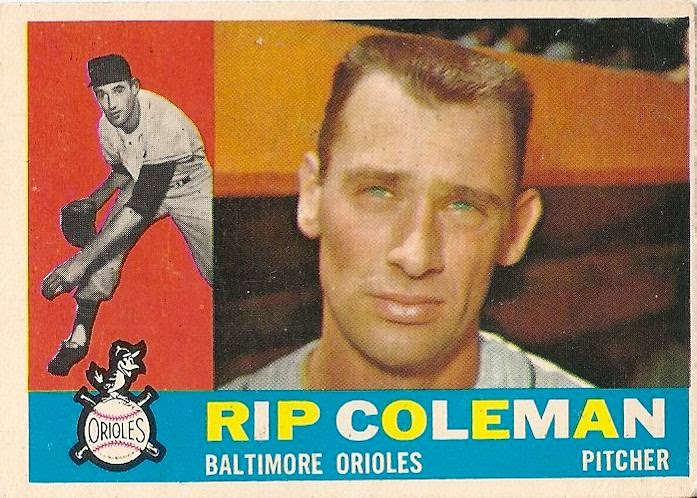 It might go without saying, but Walter Gary "Rip" Coleman is the only player in Orioles history to go by "Rip". (Unless you count the Ripkens.) Coleman holds a few dubious distinctions from his five-year big league career. As a rookie with the 1955 Yankees, he threw one inning in Game Four of the World Series...and allowed one run on five hits. After clearing the sixth inning without yielding a run, he was chased in the seventh by three straight singles. Tom Morgan cleaned up the mess, but the Yanks still lost to the Dodgers, 8-5, as Brooklyn evened the Series at two games apiece. Two years later, Rip became the last pitcher in MLB history to be credited with a shutout in a winless season. He went 0-7 with a 5.93 ERA for the Athletics, but completed five scoreless innings in a shortened game that was declared a tie. It was the second game of a doubleheader on May 19, 1957 against the Orioles. Late in the 1959 season, Coleman and his flattop haircut joined the Orioles via a waiver claim and tossed four scoreless innings of relief. His big league career ended in Baltimore the following May, as he gave up five runs in four innings spanning five games, and had a gruesome ratio of five walks and no strikeouts. But hey, he had one complete-game shutout in his career, and didn't even get a win for it, so there's a trivia question that you can use to stump your friends.